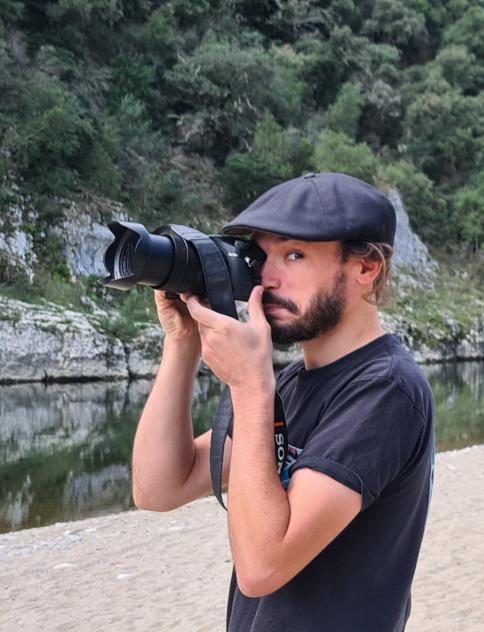 2012/2016:
-PhD Student at Bielefeld University in the neurobiology department.
Project : Theory and modelisation of insect navigation.

2010/2011 :
-Student in 1st year of Master’s program (Physics) Ecole Normale Sup ́erieure of Paris (ENS).
-Internship on the creation and characterization of Biomolecular active gels made of DNA and motor protein
in the Omar Saleh’s Lab at the Materials Science department of the University of California, Santa Barbara
(February 7th - August 22nd, 2011)

2009/2010 :
-Ecole Normale Sup ́erieure of Paris (ENS), Department of physics. (Awarded a Bachelor’s degree of Physics).
-Internship on magnetic control of asymmetric division in the worm C. elegans in the Optic and Biology team
of the Laboratoire Kastler-Brossel at ENS Paris (June 28th - July 30th, 2010).

2007/2009 :
-University Claude Bernard of Lyon, Department of Physics. (first two years in the European equivalent of a Bachelor’s of Physics degree program).

Hymenopterans, such as bees and ants, travel repeatedly during the course of the day between their nests and different food sites. They navigate in a wide range of environments, from deserts (e.g the ants of the genus Cataglyphis) to tropical forests (e.g. the bee Euglossa bidentata), and on very different spatial scales, from few meters (e.g. pinpointing the nest entrance) to several kilometers, i.e. the foraging range of the animals. During their trips, they have to steer toward their goal (e.g. their nest), but on their way they should not collide with obstacles.
The spatial information relevant for navigation on the wide range of relevant spatial scales and under variable environmental conditions may differ tremendously. How do hymenopterans acquire the relevant information? During large-scale navigation, hymenopterans partly rely on determining the direction of the goal, e.g. by using a compass, and the length of the traveled distance, e.g. provided by visual odometry in flying hymenopterans or by step counting in the case of ants. However, egocentric cues are prone to cumulative error. Therefore, additional mechanisms based on allocentric cues are necessary and have been shown to be used for small-scale (local) navigation.
The environment is rich of allocentric information. It contains odors, sounds, textures of objects, the distances to objects, etc. A single view of the scenery may contain several objects that are defined by cues such as contrast, their edges, surface texture or color. Moreover, the relative distance to objects can be extracted from the image motion generated by self-motion of the animal. However, despite the large number of studies on navigation in hymenopterans, it is still controversial which environmental features are used for naviagion and how they are combined.
Extracting relevant information is not the only problem for navigation. Indeed this information has to be stored and recalled at the relevant time. When a bee or wasp departs from an important place, such as its nest or a food source, it may perform, depending on its familiarity with the site, peculiar flight sequences ('learning flights') that have been concluded to help, on the one hand, in gathering visual information about the environment in the vicinity of this place, and, on the other hand, to memorize the information and action to perform to reach the goal again. The memory then needs to be correctly recalled during the return flight. How hymenopterans memorize and recall the information is still a largely open question.
Navigation is moreover tightly linked to motor control. What are the necessary and sufficient motor control strategies to navigate with a given type of information? Hymenopterans need, for instance, to decelerate before entering the nest, or when the environmental features used for navigation require time to be extracted. They also need to pay attention to changes in the environment, such as a moving car, not to collide with the objects. Therefore the motor control needs to integrate the information from the navigation algorithm and the collision avoidance algorithm.