A biological filter to remove estrogens from waste water and drinking water. The 15 Bielefeld students submitting this project to the ‘international Genetically Engineered Machine competition’ (iGEM) at the Massachusetts Institute of Technology (MIT) in Boston, USA are setting their sights high. They are persuading internationally active companies and associations in the biotechnology and chemistry sector to contribute several ten thousands of Euros to cover the costs of entering this rapidly expanding global competition in synthetic biology. Since May, they have been spending their free time in the laboratory making new DNA building blocks, reproducing them, and producing enzymes. First results give reason for optimism.

Published on 8. November 2010
The Cluster of Excellence "Cognitive Interaction Technology" (CITEC) at Bielefeld University will be exhibiting a new application of cognitive interaction technology for the medical profession at the MEDICA 2010 Trade Fair. You can find this at the joint stand of the State Government of North Rhine-Westphalia in Hall 3 (Booth 3/C90) from the 17th to the 20th of November. The system platform, the first of its kind in the world, presents visitors with a demonstration of how a virtual reality (VR) can be used for diagnosis, treatment, and neuropsychological rehabilitation in the fields of neurology and psychiatry.[Weiterlesen]
Posted by NLangohr in General
Tags: fo bio hp

Songbirds do have a sense of smell after all!

Songbirds can't smell. At least, that's what everybody thought up to now. However, the truth looks different: Two biologists at Bielefeld University, Dr. Barbara Caspers and Tobias Krause, have found out that young zebra finches can distinguish their own nest from other nests by the way it smells. You can read their study in the online version of the journal Biology Letters published by the renowned British Royal Society. 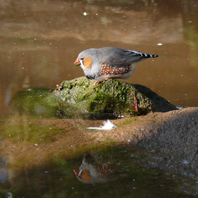