Chess is one of the oldest – and most popular – board games. On Christmas Eve, the classic game is given as a gift several hundred thousand times over, whether as a chess set, computer game, or chess computer. Yet what is the secret of successful chess players? Cognitive scientists at the Cluster of Excellence Cognitive Interaction Technology (CITEC) at Bielefeld University have been investigating this question for the past year in the project “Ceege” by recording players’ eye movements and facial expressions. Now, the researchers are revealing their preliminary results and explain why Norwegian grandmaster Magnus Carlsen again earned the title of world chess champion at this year’s tournament. 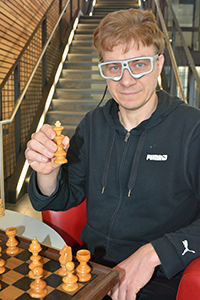 On this project, Dr. Kai Essig and his colleagues are researching which computer models can predict a player’s behavior in a game of chess. Photo: CITEC/Bielefeld University
“There are numerous theories on how the brain controls attention and solves problems in both everyday situations and game situations,” says Professor Dr. Thomas Schack. The sports scientist and cognitive psychologist heads the CITEC research group “Neurocognition and Action – Biomechanics” as well as the chess research project. “The game of chess is an ideal object of research for testing these theories because chess players have to be extremely attentive and make decisions in quick succession as to how they will proceed.”

Schack’s research group is working together on “Ceege” with Inria Grenoble Rhones-Aples, a research institute in France. The project name stands for“Chess Expertise from Eye Gaze and Emotion.”

“We are investigating individual game tactics, chess players’ behavior towards one another, and their body language,” says Dr. Kai Essig, who together with Thomas Küchelmann is working on the project. “With the findings from this project, we will be able to predict in the future how strong an individual chess player is, and how high the chances are that a player wins a match. It appears that we will even be able to recognize a series of optimal moves that will increase the player’s probability of winning.”

In order to gather as much information on players and their activity as possible, the Bielefeld researchers use various techniques. Eye tracking glasses allow players’ gaze positions to measured, while video cameras record their facial expressions and body language. Professor Dr. James Crowley and his team from the Institute Inria are focusing on chess players’ emotions, capturing for instance microexpressions – facial expressions that are only recognizable for a few miliseconds – as well as gestures, heart and respiratory rate, and perspiration.

More than 120 participants have so far played chess under observation in the study and pilot study. Of these, a third were chess experts, and the other two-thirds novices. “The current study and the pilot study already show that chess experts show significant differences in their eye movements,” says Kai Essig. “Chess experts concentrate for most of the time on the main chess pieces that can make or break the game in respective situations. The experts control their attention more efficiently than novices.” According to Essig, amateurs jump very frequently from one figure to the next with their gaze, and look at nearly all the pieces on the board, regardless of whether they play an important role in the particular game situation.

With the knowledge gleaned from their project, the researchers closely followed the chess world championship in November. “Early in the tournament, it was already apparent that Magnus Carlsen would win. He had shown more initiative in the first six matches. It was hardly possible for his opponent Sergej Karjakin to dominate the game,” says physicist Thomas Küchelmann. When observing from a distance, though, only limited conclusions can be drawn. As Küchelmann explains: “in order to make concrete predictions, we would have actually had to measure Carlsen’s and Karjakin’s game with our test equipment. It would have been interesting to measure, for instance, Carlsen’s emotional reaction to his missed end game opportunities, and his mistake in the eighth match, which he lost, along with Karjakin’s emotional reactions to running out of time in the tie-breaker.”

With their findings, the researchers want to develop an electronic chess assistant, which would analyze the weaknesses of chess novices and experts, using eye tracking for instance, and train players by providing tips and explanations. The assistant would recommend which move is optimal in the particular situation. “Looking forward, it would also be conceivable to integrate this assistive system into a robot. With their physical presence, robots could motivate players in a different way than for example an assistant operating verbally on a tablet,” explains Thomas Schack.

The “Ceege” research project will run for three years, through February 2019. The Deutsche Forschungsgemeinschaft (DFG, German Research Foundation) and the French research funding body „Agence Nationale de la Recherche“ (ANR) are providing funding for the project. Bielefeld University has received €300.000 for the research.