Would you like to be able to “hold” products from Internet retailers before ordering and delivery? In the future, people are expected to be able to sense objects despite large geographical distances with a sensory glove. The scientific foundation for this aim is now under research at the cluster of excellence Cognitive Interactive Technology (CITEC) at Bielefeld University as part of a large-scale project with ten international research institutions, funded by the European Union with 7.7 million Euros and coordinated by the Italian University of Siena (UNISI).

The researchers from Bielefeld have developed a tactile sensor the size of a human fingertip. In the future robot fingers are expected to precisely register contact points and forces. Photo: Bielefeld University.
‘In the long-term the aim is to develop a virtual reality for the senses,’ says CITEC researcher Professor Marc Ernst from the Faculty of Biology at Bielefeld University. CITEC stands for Cognitive Interactive Technology. In the cluster of excellence, research is carried out on technical systems that are intuitive and easy to use for people. For the new EU project, Ernst’s research group for Cognitive Neuroscience considers the question of how nerves in fingers and palms have to be stimulated so that the user can perceive the nuances of touch. According to Ernst, research in this area is just at its beginnings. ‘The tactile sensation of an object could, for example, be stimulated by tiny vibrations on the fingers and palms,’ Ernst explains. Also weak electrical impulses could be envisaged to give the wearer of a sensory glove the impression of touching an object. ‘People have various receptors in their hands which register points of contact and transmit sensory information to the brain. We are investigating the best method to stimulate these receptors so that a real sense of touch arises.’ On the basis of this research Internet retailers could, for example, allow their customers to virtually feel clothes, technical devices and other products with their own hands before ordering. 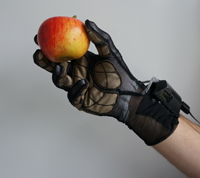 By using a sensory glove, researchers from the Cluster of Excellence CITEC of Bielefeld University record the movement of human hands. In the future, a similar glove could help to transfer data of touch to the hands. Photo: Bielefeld University
Before the user can have the impression of touch, however, it has to be recorded. On this issue the CITEC scientists Professor Helge Ritter and Dr. Robert Haschke from the Neuroinformatics group of the Faculty of Technology are working. Together with their colleagues they are developing tactile sensors which allow to perceive the surface and texture of an object. The first prototype was around the size of a beer mat. When the scientists put an object on it, for example a pen or a mobile phone, it records the contact points as well as the applied pressure. ‘One of the challenges is to imitate the sensitivity and spatial resolution of the human skin in a technical sensor and at the same time to realise important properties like the curved shape of a palm or the softness of skin,’ says Professor Ritter. ‘ In addition, the technical sensory signals have to be processed in a way that is suitable for transfer onto people.’  The scientists follow two research directions: First, they are developing a miniature version of their prototype, whose highly sensitive sensors will be so small that they can fit into the fingertips of a robot hand. Secondly, they are also working on a flexible sensory glove, which can be worn by people.

The results could also be used for the construction of a robot that could stand in place for a person in places that are dangerous or impassable. It would be fitted with a multi-fingered hand imitating the human hand in real time. A person, an astronaut for example, could feel the contact forces perceived by the robotthrough the sensory glove. Thus, one could feel and manipulate objects that are far away.

Further information is available online at:
http://cordis.europa.eu/projects/rcn/106994_en.html
Posted by JHeeren in General
Kommentare: