« Bielefeld University... | Startseite | Bielefeld iGEM Team... »
Published on 17. Oktober 2016, 16:10 h
Significant investment in personnel to be made in the next two years

“In the next two years, we will be hiring more than 40 additional professors,” announced Rector of Bielefeld University Professor Dr.-Ing. Gerhard Sagerer in his speech at the annual university reception held on Friday, 14 October 2016. “We will mostly be accelerating tenure appointments, which is the core of our comprehensive staffing initiative known as UNIplus. With this initiative, we will ensure the quality of university teaching while at the same time enhancing our research profile.” This initiative is being made possible the university’s financial situation in the medium term, which has become more predictable. “I am pleased that Bielefeld University is using the financial resources for a strategic staffing initiative,” says Minister of Science Svenja Schulze. 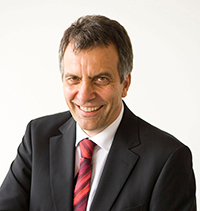 Rektor Gerhard Sagerer: “We will ensure the quality of university teaching, while at the same time significantly enhancing our research profile.” Photo: M. Brockhoff / Bielefeld University.
Behind the scenes of UNIplus, the Rector’s Office worked closely with the various university faculties on an intensive planning process over the past months. The plans have largely been agreed upon with eight of the 13 faculties, and decisions regarding implementation have already been made. The planning process with the remaining faculties should be finished by the end of the year. UNIplus is the largest wave of tenure appointments for professors at Bielefeld University since its founding in 1969.

In the coming years, approximately 45 professors from all faculties are scheduled to go into retirement. With UNIplus, a large number of these tenured professorships will now be appointed earlier, and in a targeted way. This will improve the teaching and advisory situation for the increased number of students, and will strengthen the university’s research profile. At the same time, the university is using this time frame to its advantage: plans can be made for the next few years with the additional funds. After this, the program affords the flexibility to reduce the number of positions back to their original level, or hire additional professors should the funding again be available.

Background: Strategy for Excellence and Number of Students
“We are in serious competition with other universities over budgets and external funding, not to mention excellent researchers. At the same time, we are being confronted with significant increases in the number of students attending the university,” explains Professor Sagerer. “With UNIplus, we are positioning ourselves to better compete, and are addressing challenges in an effective way – it’s a great opportunity for Bielefeld University.”

In the area of research, the competition is currently being shaped by the next round of the Excellence Initiative: the Excellence Strategy of the federal government of Germany will be laying the framework for the positioning within the university system from 2019 onwards. UNIplus will strengthen Bielefeld University’s strategic priority areas in its clusters of excellence, special research fields, and cooperative projects.

UNIplus will also strengthen university teaching: during summer semester 2005, the number of students at Bielefeld University was 16,900. By summer semester 2016, that number had grown to 23,100 – an additional 6,200 students, or an increase of 37%. Comparable developments have also taken place at the other universities in North Rhine-Westphalia. Forecasts from the Kultusministerkonferenz (conference of ministers of education) indicate that the number of students beginning their studies in the next 10 years will remain significantly above the 2005 level and will only decrease slightly. Bielefeld University currently has 263 professors. For students, the additional 40 professors will provide better teaching and support, as well as a wider selection of courses.

In the first half of 2016, it became clear what the financial conditions would be for universities in North Rhine-Westphalia through at least 2021. This knowledge provided Bielefeld University’s with a reliable forecast about its financial and funding situation for the medium term: through at least 2021, significant additional funding will be available.

Among other purposes, these special funds from the state will be used to make teacher training programs and integrated special education programs permanent (in German: LABG-funding and ISP-funding). The programs had previously been temporary. Nevertheless, Bielefeld University had already created permanent positions in these programs and will staff additional ones in the future.

Funding for quality improvements (replacing student tuition contributions) will also again be made available at the previous level. These funds serve the express purpose of improving conditions for students and teacher-student advisory relationships. These funds are not meant to create additional spots for students to study at the university. Instead, the funding should be used in the faculties to add permanent positions focused largely on teaching, which will help to improve the quality and effectiveness of university instruction.

In the Faculty of Law, six additional tenured professorships are being created, which link to thematic focuses within the University, such as to the Cluster of Excellence Cognitive Interaction Technology. In the area of economics, two additional tenured professorships are being created, which will strengthen the university’s research focus in data science. This priority area is meant to be further developed throughout the entire university in both research and teaching, and to accomplish this, additional positions will be created.