Thermal spin currents confirmed in both space and time

The national priority programme ‘Spin Caloric Transport’ (SpinCaT) funded by the German Research Foundation (DFG) was set up to examine how magnetic currents can be generated through differences in temperature and explore their potential future use to save energy in nanoelectronics. Bielefeld University’s Faculty of Physics worked on seven projects in the now successfully completed programme that was launched in 2011. Dr Timo Kuschel and Professor Dr Günter Reiss and their research team achieved further breakthroughs in three projects.

Dr Timo Kuschel together with the PhD student Panagiota Bougiatioti and Dr Oliver Reimer (from right to left). Photo: Bielefeld University
Electrons possess their own angular momentum. They turn on their own axis. In physics, the technical term for this property is ‘spin’. Such an electron spin is what makes electrons behave as magnets. However, what is special is that even when they maintain their position (i.e. do not move), electrons can pass on their spin to neighbouring electrons. This chain-reaction-like process in which a spin is passed on magnetically as information is called the spin current. It can be generated through differences in temperature between two ends of an electronic component. The advantage of spin current over the usual electricity is that it generates hardly any additional heat, thereby saving more energy.

Most of the heat generated by electronic machines such as computers is not used. Indeed, a great deal of energy is generally needed to cool them. A research group headed by the Bielefeld physicists Dr Timo Kuschel and Professor Dr Günter Reiss used the DFG priority programme SpinCaT to study how spin currents can be generated, manipulated, and detected. ‘This will enable us to use wasted heat for new types of data storage along with other computer components based on spin current and thereby help to save energy,’ explains Kuschel.

Confirmation of spin currents: Confirming that a spin current is generated in a specific material is not a trivial concern, according to Kuschel. ‘In some materials, it cannot be shown unequivocally, because other effects such as classical thermoelectric effects are automatically detected as well.’ The Bielefeld PhD student Panagiota Bougiatioti has now succeeded in developing a method for such materials that filters out and separates parasitic effects from the effect generating the spin current. This enables scientists to determine unequivocally whether a spin current is generated in a specific material. The project team also included researchers from Osnabrück University and the European Synchrotron Radiation Facility (ESRF) in Grenoble. It has published its findings in the journal ‘Physical Review Letters’. 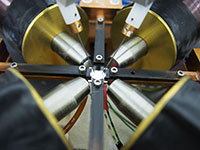 Setup for generating differences in temperature in spin current material that can be aligned in specific spatial directions. Photo: Dr Torsten Hübner
Spin current in space: A spin current moves along a difference in temperature: a magnetic signal is transferred from, for example, hot to cold. Dr Oliver Reimer, who received his doctorate from Bielefeld University’s Faculty of Physics, succeeded in building a new setup that can generate differences in temperature on a small lengthscale and in specified spatial directions. This now makes it possible to induce spin currents that vary spatially in a material – previously, this was possible in only one single direction – and to study new kinds of effect that depend on which direction a spin current takes. The Bielefeld project team carried out this research in cooperation with the University of Regensburg. Reimer has presented its results as first author in the Nature journal ‘Scientific Reports’.

Spin current in time: In a further project, Dr Timo Kuschel together with Dr Johannes Kimling from the University of Illinois in the United States have used very short time scales to measure how long it takes for a spin current to emerge. With the aid of state-of-the-art laser technology, the scientists continuously repeated their experiment while varying the time between the generation and the emergence of a spin current: how large is the spin current after 1, 10, or 25 picoseconds? The paper by the international project team has been published in the journal ‘Physical Review Letters’.

Dr Timo Kuschel and Professor D. Günter Reiss are interested in continuing their research in the field of spin caloritronics: ‘This field has already exerted a strong influence on basic research, but is still in its infancy when it comes to applications. Therefore, the next step will be to transfer basic knowledge in physics to technical applications.’

In 2008 scientists at Tohoku University in Japan laid the foundation for research in spin caloritronics. In the first funding period of the priority programme, the Bielefeld research team run by the physicists Professor Dr Günter Reiss, Dr Timo Kuschel, Privatdozent [senior lecturer] Dr Andy Thomas, and Dr Jan-Michael Schmalhorst carried out three projects on material and measurement issues in the thermal generation of spin currents. In 2014 Bielefeld University’s Faculty of Physics extended its participation in the DFG programme and was granted 800,000 euros for four projects. For the research in the SpinCaT projects, physicists at Bielefeld cooperated with numerous work groups including ones from Munich, Braunschweig, Greifswald, Alabama (USA), and Sendai (Japan).

Posted by MBerthold in General
Kommentare: