The more the better!

« First prize for... | Startseite | 250,000 Euro for... »
Published on 29. November 2013, 10:41 h
Study of the University Bielefeld and TU Braunschweig shows the impact of polyandry on reproductive success in fire salamanders

Researchers at Bielefeld University and the Technische Universität Braunschweig are the first to confirm the benefit of multiple paternities for a vertebrate under completely natural conditions. Together with their team, Dr. Barbara Caspers and Dr. Sebastian Steinfartz have shown that female fire salamanders mate with several males under natural conditions (so-called polyandry). This grants them fitness-relevant benefits by increasing their number of offspring. The results of their study are being published this Friday (29 November) in the Early View version of Molecular Ecology: http://onlinelibrary.wiley.com/doi/10.1111/mec.12577/full. For a long time, it was assumed that females in the animal world are monogamous, that is, they mate with only one male. Males, in contrast, can increase their reproductive success by mating with several females. Nowadays, however, polyandry is assumed to be the rule in the animal world and monogamy to be more of an exception. 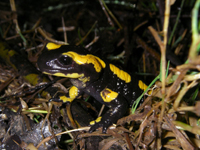 Researchers in the Molecular Ecology and Behaviour research group at Bielefeld University’s Chair of Animal Behaviour have studied the females of the indigenous black and yellow fire salamander. (Photo: Bielefeld University)
Currently, researchers from completely different disciplines are interested in why females mate with several males and what benefits this brings for them or their offspring. There is a particular interest in studies that permit insights and conclusions on these processes under completely natural conditions. As a rule, however, such studies are hard to implement without disturbing the individuals or studying their mating behaviour completely or partially in the laboratory.

Researchers at Bielefeld University’s Chair of Animal Behaviour in the group of Dr. Barbara Caspers, Dr. Sebastian Steinfartz, research group leader at the TU Braunschweig, and Professor Michael Kopp from Aix-Marseille University  have studied the influence of mating behaviour on the number of offspring in the black and yellow fire salamander (Salamandra salamandra), a widespread European tailed amphibian species. Over the course of the spring season, a female salamander can deposit up to 50 living larvae in small streams and ponds. For their study, the scientists captured female salamanders on their way to deposit their larvae in a forest and took the pregnant females to the laboratory where they deposited their larvae. Every day, the scientists collected the new-born larvae, took a small tissue sample, and returned both mothers and their larvae to the forest. By subjecting these tissue samples to genetic paternity analyses, the researchers could precisely reconstruct how many males each female had mated with and whether or not the sperm of the different males had been mixed – female salamanders can store the sperm of different males for several months in internal receptive organs called spermathecae. The eggs of the female will only be fertilized with the stored sperm, if environmental conditions are optimal and after eggs have developed into full larvae these are deposited in streams and ponds.

It is important to stress that the sperm from the male are deposited on the ground as a sperm packet (called spermatophore) during courtship display, and that the female then actively picks up the spermatophore. Afterwards, the female can decide from which males she will accept sperm or not. Through paternity analyses, the researchers were able to show that some females had mated with as many as four different males. The mixing of the sperm from various males in the spermatheca of the female seems to have quite positive effects, leading to more eggs being fertilized and, as a result, more larvae were finally deposited. Accordingly, polyandry and sperm competition seems to be an important mechanism to increase reproductive success and therefore fitness of a female in this terrestrial vertebrate species.

By mating purposefully with various males (in the photo, the male is below and the female on top), female salamanders can increase their number of offspring. (Photo: Axel Drechsler)
Posted by NLangohr in General
Kommentare: