Taking stem cells from the nose for new medical treatments

A research team headed by the cell biologist Professor Dr. Barbara Kaltschmidt from Bielefeld University has successfully cultivated stem cells from the human nose and transformed them into nerve, bone, fat, and cartilage cells. The researchers report that one advantage of their method is that it can be used to produce large numbers of cells in a very short time. This can lead to new treatments of acute and chronic face injuries. They have now published their findings in the journals "Stem Cells and Development" and "European Cells & Materials". 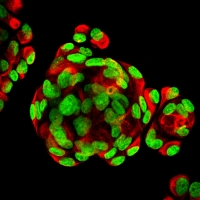 Stem cells from the inferior nasal turbinate: the 630x magnification shows the cell nuclei (green) and the protein nestin (red) that are typical for stem cells.
Stem cells are what are known as the all-rounders among the cells. Whereas most of the cells in our bodies have their own special tasks – such as skin cells to protect us from external damage – stem cells are not specialized: They are parent cells that can turn into skin, nerves, or even bones. Another of their functions is to repair damaged cells after injury or illness. The cells that the researchers are using for their new method are called adult stem cells – the cells to be found in the human organism following birth. In contrast to embryonic stem cells, which have to be obtained from human foetuses, the scientific community considers the use of adult stem cells to be ethically acceptable.

Professor Barbara Kaltschmidt's research team is working with stem cells from the part of the nose known as the inferior nasal turbinate. That makes them very easy to access. A further special feature is that, even in aged patients, they can be isolated and transformed into specialized cells.

With this advanced method, the scientists see new chances for treating injuries and disease. For example, surgeons could use skin, bone, and nerve cells cultivated from stem cells to rebuild faces after burns or cuts. In the future, these stem cells could also be used to treat neurological disorders such as Parkinson's and Alzheimer's disease. By using human blood plasma to cultivate the stem cells, the scientists are avoiding the use of animal additives. When treating a patient needing, for example, new facial skin, this means that the patient's own stem cells can be cultivated in the patient's own blood plasma – the advantage being that the body will not reject the new tissue. In addition, using blood plasma leads to the emergence of a three-dimensional matrix that imitates the original stem cell niche.
The discovery of the stem cells is the outcome of a cooperation between the researchers at Bielefeld University's Chair for Cell Biology and scientists at the Max Planck Institute for Molecular Medicine in Münster, the Ear, Nose, and Throat Hospital at Klinikum Bielefeld, and the Heart and Diabetes Center North Rhine-Westphalia in Bad Oeynhausen. Scientists at Bielefeld University's Faculty of Physics also contributed to the research findings.

The researchers now want to proceed further and find out how adult stem cells from the nose can be "reprogrammed" to make them even more plastic. This should extend the range of possible medical applications.

Stem cell research at the Faculty of Biology is part of Bielefeld University's "Molecular and Nano Sciences" profile. In this broad field, the University has built up a strong national and international position through its focus on the interfaces between physics, chemistry, biology, and bioinformatics. Current research ranges from nanolayers and single molecule processes up to bacterial, vegetable, and animal cells. It is being carried out through interdisciplinary cooperations, many of which are located in the Center for Biotechnology (CeBiTec).

For information in the Internet:
web.biologie.uni-bielefeld.de/cellbiology/