Tailor-made synthesis of cyclic chemicals by means of enzymes

Penicillin-based antibiotics contain a five-membered hydrocarbon cycle, additionally incorporating a sulfur and a nitrogen atom. Nadine Zumbrägel, doctoral student at the Chair of Organic Chemistry I at Bielefeld University, has succeeded in selectively synthesizing this important substructure with different residues on this cycle using a biotechnological method. The targeted design of such structures now enables the preparation of substance libraries of such so-called heterocycles, which can in future be used by the pharmaceutical industry to find new active substances. Besides the Bielefeld chemists, two scientists from the Ruhr-University Bochum were also involved in the studies. The researchers present their findings today (16 May 2018) in the renowned journal “Nature Communications” with Zumbrägel as first author and Professor Dr. Harald Gröger, head of the Chair of Organic Chemistry I, as corresponding author. 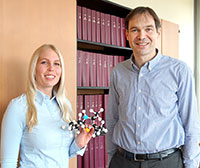 Doctoral student Nadine Zumbrägel and Professor Dr. Harald Gröger are conducting research on organic synthesis using biocatalysts. Photo: Bielefeld University
Recently, in the renowned specialist journal “Chemical & Engineering News”, antibiotics were described as one of the nine ways chemistry has changed the world. Of particular importance are penicillins, which in turn contain a five-membered hydrocarbon cycle with a sulfur and a nitrogen atom additionally incorporated therein. The selective production of this important substructure, flexibly equipped with different substituents on the cycle, in turn represents a substance library for finding new drug structures. In principle, access to these cyclic structures is conceivable from easily accessible substrates, the so-called 3-thiazolines. The cyclic structure is already pre-formed and “only” one double bond has to be converted into a single bond by means of a reduction.

Although these 3-thiazolines have been known for decades and were first reported in the 1950s, this conversion proved to be synthetically difficult. This is remarkable since a large number of chemical methods are generally available for the reaction type of reduction and have already been successfully used for numerous synthesis purposes. There are several reasons why such “classical chemical” processes proved ineffective in the production of this compound class of five-membered cycles with incorporated sulfur and nitrogen atoms: for instance, strongly reducing processes lead to undesired ring-opening and in other reduction processes with metal catalysts, the sulfur contained in the cycle acts like a catalyst poison. The required selectivity also proved to be an insurmountable hurdle: during reduction, chiral compounds can form, which behave like image and mirror image. For active substances it is important that only one of these forms, so-called enantiomers, is present. Previous methods were able to preserve the ring in the best case, but resulted in only extremely low selectivities.

In her doctoral thesis funded by the German Federal Ministry of Education and Research (BMBF) as part of the “Biotechnology 2020+, Next Generation of Biotechnological Processes” funding programme, Nadine Zumbrägel has now succeeded for the first time in reducing 3-thiazolines without side reactions to the desired target compounds in a highly selective manner, forming only one enantiomer. For this purpose, she used representatives of the enzyme class of the so-called imine reductases as biocatalysts. Zumbrägel explains: “The pharmaceutical industry is increasingly demanding highly enantioselective synthesis methods. One possibility is the use of enzymes as suitable catalysts, which are reaction accelerating molecules in chemical processes.”

The researchers also succeeded in extending the reduction method to other sulphur-containing heterocycles, thus developing a platform technology. The applicability of this reduction method has also already been demonstrated by the scientists on an enlarged laboratory scale. “This successful combination of biotechnology and heterocyclic chemistry is a further proof for the potential of enzymes as natural catalysts for use in preparing chemicals,” says Gröger, who has been conducting research on biocatalytic processes for the synthesis of industrial chemicals with his research group at Bielefeld University since 2011. In cooperation with Professor Dr. Stefan Huber from the Ruhr-University Bochum, who carried out quantum mechanical calculations, it was also possible to rationally reproduce the experimental observations with the aid of computer chemistry. Dr. Christian Merten, likewise from the Ruhr-University Bochum, also combined quantum mechanical calculations with VCD (Vibrational Circular Dichroism) measurements, which enabled the determination of the stereochemical properties of the target compound.