With new funding, the psychology of religion teams at Bielefeld University (Germany) and University of Tennessee at Chattanooga (USA) are able to expand and deepen their research on religious development over the life-span. The researchers working with Heinz Streib at Bielefeld University and Ralph W. Hood at the University of Tennessee at Chattanooga will therefore be able to expand their sample and extend their longitudinal investigation. The John Templeton Foundation  is providing 1.25 million euro in funding for the new project phase as of 2018. 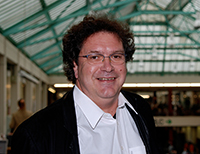 Prof. Dr. Heinz Streib. Photo: Bielefeld University
How do people’s beliefs change during the course of their live time? How do people feel and reflect about their lives and about what is important and meaningful to them at different phases of life? How do such changes develop in Germany – and how does this compare with the USA? Professors Heinz Streib and Ralph W. Hood and their research teams in Bielefeld and in the USA have been researching these questions in various projects for several years. The first phase of their large-scale cross-cultural longitudinal study on religious development has been running since 2014, funded by the John Templeton Foundation and the German Research Foundation (DFG).

The German-American teams working with Streib and Hood - the Bielefeld team includes psycho-analyst Dr. Barbara Keller and linguist Ramona Bullik - combine quantitative and qualitative methods in their research: a comprehensive questionnaire assesses, for example, dimensions of personality, mystic experiences, and psychological well-being and growth at several points in time. It will therefore be possible to document changes directly and describe observations over time. At the same time, a selection of participants will be invited to a personal interview, the faith development interview. In James Fowler’s Faith Development Interview the questions are designed to elicit narratives and thoughts about the respondent’s life history, relationships, values and religiosity or their world view. Adults of all ages with a variety of religious, spiritual or other, possibly atheist/humanist, orientations are interviewed. At this point in time, over 4,400 people have completed the questionnaire in past projects at varying times. Additionally, about 800 people received a faith development interview.

There are now plans to extend the existing database by several hundred interviews and participations in the questionnaire during the new phase of the project. The new project phase begins in January 2018 and spans 33 months. “The religious landscapes of both cultures will be covered well through the large quantity of interviews,” says Streib. What is special about the current project and the new one, however, is the longitudinal study based on the repeated participation in a questionnaire as well as a faith development interview after a period of several years. “This approach is unique in research on religious development and can answer the question as to whether religious development actually takes place and in what way,” explains Streib and continues: “Among other things, it will be highly interesting to see what development is reported by those people who describe themselves as “spiritual”, and whether there are any differences when comparing German and American respondents.” It will likewise be exciting to find out how sig-nificant experiences such as conversion and deconversion are recounted and interpreted in the interviews some years later.

Further information on current study findings:
•    Website of the Center for the Interdisciplinary Research on Religion (Research Center for Bio-graphical Studies in Contemporary Religion): http://www.uni-bielefeld.de/(en)/theologie/forschung/religionsforschung/forschung/streib/
•    Press release: Study on spirituality in Germany (10/11/2015): https://ekvv.uni-bielefeld.de/blog/uninews/entry/people_live_their_own_form
•    Press release: Study on the terms spirituality and religiosity (24/2/2012): https://ekvv.uni-bielefeld.de/blog/uninews/entry/more_spiritual_than_religious