Study on blue tits: Smell first, and then beg

Nestling blue tits can discriminate between the smell of other nestlings and adapt their begging behaviour accordingly. This is the outcome of the latest study by Dr. Barbara Caspers and Dr. Peter Korsten from Bielefeld University to be published today on the 12th of May in the journal ‘Functional Ecology’. The behavioural biologist Caspers is currently studying odour discrimination in various animals as a ‘Freigeist’ fellow sponsored by the Volkswagen Foundation in her project ‘Der Geruch der Verwandtschaft – wie entsteht er, wie riecht er’ [The smell of kinship – how does it develop, what does it smell like]. 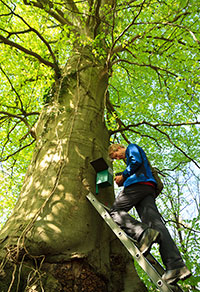 Dr. Peter Korsten is studying mate choice and family life particularly in blue tits. Photo: Sander van der Werf
In this subproject, Dr. Barbara Caspers and Dr. Peter Korsten from Bielefeld University and Marta Rossi from the University of Sussex in Brighton (Great Britain) examined the begging behaviour of seven-day-old blue tit nestlings from a population near the Dutch city of Groningen. ‘Blue tit nestlings beg to obtain food from their parents and may have to compete with as many as ten peers in the nest that are not all necessarily full siblings,’ explains Dr. Peter Korsten. In earlier studies of other songbirds, it was already found that this competition intensifies when nestlings are competing with non-kin. Then nestlings beg even more intensively for food.

In the present study, the research team presented nestlings of blue tits with two different smells: an familiar smell of siblings from their own nest and an unfamiliar smell of unrelated nestlings from another nest. In both experimental situations, the biologists then measured how much the nestlings begged. Results showed that blue tit nestlings beg longer and more intensely after being exposed to the smell of the unfamiliar nestlings compared to the familiar smell of their own nest mates. ‘Up to now, we did not know how songbird nestlings were able to discriminate between the smell of close kin and less related individuals when competing for food from their parents. Our study shows that they may well smell this difference,’ says Caspers. 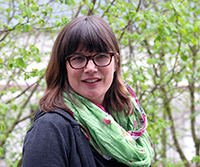 Science had long assumed that birds cannot smell at all. Behavioural researchers together with Dr. Barbara Caspers at Bielefeld University have already been able to disprove this in earlier studies on zebra finches.
On the researchers:
•    Dr. Barbara Caspers has been carrying out research since 2014 as a Freigeist fellow. This 975,000-Euro scholarship is awarded over five years to ‘excellent post-docs’ carrying out ‘risky, unconventional research’ in Germany. She is working as a post-doc in the field of behavioural research at Bielefeld University.
•    Dr. Peter Korsten is studying the behaviour of wild birds, particularly blue tits, focussing on their mate choice and family life. Following his dissertation at the University of Groningen (the Netherlands) and research at the Universities of Edinburgh (Scotland) and Antwerp (Belgium), he has been working in Bielefeld University’s Department of Animal Behaviour since 2015.
•    First author Marta Rossi carried out the present study on the sense of smell of blue tits as a research assistant at Bielefeld University. She is now a doctoral student at the University of Sussex in Brighton (Great Britain).

Researchers at Bielefeld have confirmed that blue tits, particularly when young, can recognize their kin through smell and modify their behaviour accordingly. Photo: Bielefeld University/Oliver Krüger