The genetic code forms the basis for all life on our planet by regulating the formation of proteins. Extending this code makes it possible to form new proteins. This can produce organisms with new functions that can be used in, for example, medicine. Fourteen students attending different courses at Bielefeld University have taken on the challenge of extending the genetic code for this year’s iGEM Competition in Boston, USA. 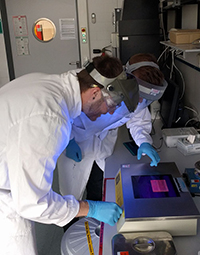 Yannic Kerkhoff and Daniel Bergen are identifying DNA fragments with UV light. Photo: Bielefeld University
iGEM stands for ‘International Genetically Engineered Machine’ and is the most important non-commercial competition in synthetic biology. From the 9th to the 13th of November, more than 300 teams from more than 30 countries will be presenting the projects they have developed and competing with them in various categories. An international jury will judge the projects and award prizes to the best.

For this year’s project, the Bielefeld team has chosen a central topic in synthetic biology. The students want to change the genetic code of an organism so that it will produce much needed substances such as medically useful proteins.

The students are working with the intestinal bacterium Escherichia coli – the most frequently studied organism in biotechnology. Their goal is to plant a new building block in the DNA code that is not to be found in the natural bacterium. This should lead to new amino acids (building blocks of proteins) in the bacterium that can be used, for example, to purify sensitive proteins for applications in medicine and therapy. ‘With this method, we can, for example, purify antibody fragments for medicines,’ says Yannic Kerkhoff, a member of the Bielefeld iGEM team.

The aim of the project is to develop a biological toolbox that will enable future iGEM teams and researchers to build previously uncommon amino acids into the proteins of bacteria and thereby open up new paths of research.

To achieve its goal, the team has already extracted RNA (ribonucleic acids that translate the genetic information into proteins) from the croton oil tree – a type of plant that produces new DNA building blocks (a nucleic base) as antigens. The next step is to insert this base into a DNA sequence. The team has also succeeded in synthesizing one of the new amino acids, thereby enabling it to demonstrate new functions. After successfully completing pilot trials, the team is now starting to demonstrate this functionality in the living organism.

The team is being supervised by Professor Dr. Jörn Kalinowski, Dr. Christian Rückert, and Professor Dr. Kristian Müller from the Center for Biotechnology (CeBiTec) together with two experienced iGEM participants: Boas Pucker and Julian Droste. Bielefeld is the only German university to send a team to every competition over the last eight years. Successes in recent years include a Vice World Master title, the European Grand Prize, and special prizes for the Best Environment Project, Best Presentation, and Best Integrated Human Practice. In addition, Bielefeld teams have won gold medals in every competition they have attended so far.

Alongside laboratory work, a successful project depends essentially on dialogue with the general public. Therefore, the team has presented information about the project and synthetic biology to interested persons at many venues including the CeBiTec-Schülerakademie [school pupil academy], the GENIALE science festival, and the Mitmach-Labor Teutolab [a university project providing extracurricular science courses for school children]. Moreover, both cooperation with other iGEM teams and contact with experts in the field are essential if a complex project is to succeed. For example, the team has also organized a specialist conference on the topic of extending the genetic code.