Automotive manufacturers use wind tunnels to test the aerodynamics – and thus the gas efficiency – of their new vehicle models. Engineers today also use virtual wind tunnels during the early stages of design conception. With a virtual wind tunnel, computer software calculates how the components on the vehicle must be changed in order to make it more aerodynamic. The software, however, often takes the goal of improving the aerodynamics of a vehicle to such an extreme that it becomes so misshapen that a normal engine no longer fits inside the car. Researchers at the Cluster of Excellence Cognitive Interaction Technology (CITEC) at Bielefeld University have developed an algorithm to prevent this from happening. Their research findings are now appearing in the respected journal Computer Aided Design. 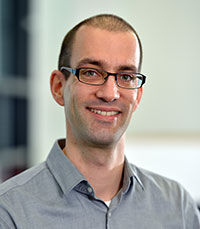 The software developed by Dr. Mario Botsch and his team ensures that important geometric criteria for a vehicle model are met. Photo: Bielefeld University/CITEC

The scientists were working on a software project that virtually reshapes the vehicle design so that it is as aerodynamic as possible. “We have improved this software so that it is easier to operate and works more efficiently,” says Professor Dr. Mario Botsch from the Faculty of Technology at Bielefeld University. He heads the research group “Computer Graphics and Geometry Processing” which is part of the CITEC Cluster of Excellence.

“Existing software that simulates and optimizes vehicle design often only takes the aerodynamics into account,” explains Botsch. The algorithm takes an initial vehicle design and modifies it until the air drag is minimal. “At the end, a draft of a design can come out that yes, is aerodynamic, but practically speaking, it cannot be used. Our software ensures that certain geometric criteria are met,” says Botsch. Such criteria include, for instance, that the interior of the car is both high and wide enough for a person to sit comfortably inside, or that the engine fits under the hood and the wheels fit in the wheelhouse.“ Unsuitable vehicle designs are often identified and excluded only after intensive computational simulation in the virtual wind tunnel. Our software ensures that unsuitable designs never even make it to the wind tunnel,” explains Botsch.

Computer scientist Daniel Sieger, who works in the research group led by Mario Botsch, developed the algorithm. “For us, the project was not just about making more realistic vehicle designs that are better suited for manufacturing,” says Sieger. “The new programme is also much easier to use than existing software. With our software, the important geometric boundary constraints can be prescribed directly, for example, that the wheelhouse has to remain round. Previously, engineers could only do this indirectly by tweaking optimization paramaters, if this was even possible at all.”

The algorithm was developed in order to improve the aerodynamic design of vehicles that will later be tested in a virtual wind tunnel, but it could also be used in other simulations. “For instance, the algorithm could be used to produce a car design optimized for crash test simulations. In the case of a crash, this would ensure that the passengers are protected as well as possible,” explains Daniel Sieger.

In their research article, Mario Botsch and Daniel Sieger describe the methods and the key features of the software programme. The article received the Best Paper Award at the “International Meshing Roundtable” symposium in London at the end of October 2014. This annual conference addresses computer-aided modelling and the optimization of geometric shapes. A second, expanded version of this article also appears in the journal Computer Aided Design.

The research group “Computer Graphics and Geometry Processing” engages with issues of generating and optimizing geometric information, among other topics. In addition to interactive shape deformation, the team also works on 3D-scanning of objects (such as faces) and realistically visualizing virtual scenes in real time.

Posted by NFrei in General
Kommentare: