Computers evaluate data that are then used to make predictions for medicine, insurance, or policing: what effect do these algorithms and their predictions have in society?  The Bielefeld academic Elena Esposito is receiving an ERC Advanced Grant from the European Research Council (ERC) for her sociological research on this topic. This grant is awarded to outstanding researchers who are already established, leading principal investigators in their field of research. It is worth 2.1 million euros over a period of five years. In the eleven-year history of the ERC Grants, Esposito is only the second person to bring an Advanced Grant in this field to Germany. 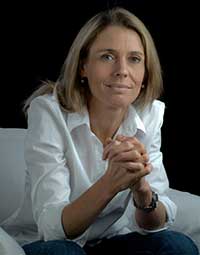 Professorin Dr. Elena Esposito. Photo: Piero Casadei
‘How predictions are developed from algorithms is an exciting research issue and an urgent challenge for the social sciences. In particular, there are three areas of society that have to address the fundamental effects of forecast: personalized insurance, precision medicine, and predictive policing. These three areas are the focus of my research,’ explains Esposito.

‘We are delighted to count such an outstanding sociologist among our scientists,’ says Professor Dr.-Ing. Gerhard Sagerer, Rektor of Bielefeld University. ‘The ERC Grant also confirms how important it is to understand the significant changes of the digitalized world.’

Esposito is one of the leading representatives of sociological systems theory. The Italian academic first studied sociology and philosophy in Bologna. Then in 1990, she gained her doctorate at Bielefeld University with Niklas Luhmann as her doctoral supervisor. In 2001, she gained her post-doctoral habilitation – also in Bielefeld. She pursued her academic career in parallel at the Università di Modena e Reggio Emilia in Italy, where she is still working as Professor, and also as a guest researcher at universities throughout the world. Since 2016, she is once more carrying out her research at Bielefeld University as Professor of Sociology and Interdisciplinary Connectivity.

In the past, there have been three scientists at Bielefeld University who have received an ERC Grant. Just last July, Professor Dr Minh Nguyen, who is also a sociologist, received an ERC Starting Grant for her social-anthropological research on East and South-East Asia. Such grants are for excellent and highly promising young researchers. In 2017, the cognitive scientist Professor Dr Christoph Kayser came to Bielefeld University with an ERC Consolidator Grant. He is studying how and where in the brain the senses merge. His work is being funded until 2020. From 2012 to 2015, the chemist Professor Dr Achim Müller received an ERC Advanced Grant for established active researchers with a recognized track record of significant research achievements.