Compromises – what are they and what are they good for? Over the next two years, Professor Dr. Véronique Zanetti will be able to engage in an intensive academic study of this topic. She has been selected by the Volkswagen Foundation for an ‘Opus magnum’ funding. This frees outstanding academics from their university duties for up to two years by financing a teaching substitute. This grants the candidate the necessary freedom to write a larger scholarly treatise. The Volkswagen Foundation provides up to 100,000 Euro per year. This year, it has granted nine ‘opera magna’. 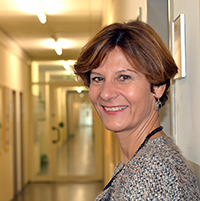 Professor Dr. Véronique Zanetti will be carrying out research on the topic of compromises from a philosophical perspective. Photo: Bielefeld University
‘I am pleased for Dr. Zanetti and I congratulate her very cordially for her wonderful success. I view this award as not only recognition of her outstanding achievements but also as confirmation of the general strengths and importance of the humanities for our university,’ says Rektor Professor Dr.-Ing. Gerhard Sagerer.

Professor Dr. Véronique Zanetti wants to use this time to carry out an academic analysis of the topic ‘compromises’ from a philosophical perspective. ‘Making compromises on moral topics is generally frowned upon. Those who do so are considered to lack character,’ says the academic. ‘At the same time, compromises are often unavoidable in politics, in legal rulings, and in everyday practice. They are often even a constructive approach to settling interpersonal conflicts in a peaceful way.’

Compromises can also be decisive in theory, for example, when incompatible courses of action clash. That can be the case in conflicts over norms. There is often no common denominator here. ‘When you realize the indispensable role that compromises play in both individual and social life, it is amazing to see how shabbily they have been treated by philosophy.’ During her ‘opus magnum’, Zanetti wants to get working on one of the first philosophical monographs on the conceptual and normative aspects of the compromise. The philosopher wants to use this to analyse the various dimensions of compromise and to test the viability of her analysis on two examples. The first example addresses the transition from apartheid to a democratic regime and the problem of traditional criminal justice. The question arising here is whether victims have a moral right to see political criminals punished. Or should preference be given to the pragmatic target of achieving peace over achieving political justice? She want to use the example of the law passed by the South African parliament at the end of apartheid to show that there are special cases in which peace has priority over justice and the parties in dispute can be required to reach a compromise. The second example is the political conflict between Israel and Palestine.

Véronique Zanetti studied philosophy, musicology, and English studies in Geneva. Posts on her academic career have included Siegen, Bern, Fribourg, and New York. She wrote her doctoral thesis on Kant and her post-doctoral habilitation on ethical aspects of political intervention. Since 2003, Zanetti has been a member of the Swiss Ethics Committee on Non-Human Gene Technology (ECNH). Since 2004, she has been Professor of Political Philosophy and Legal Philosophy at Bielefeld University.