On the Trail of the Brain

Professor Dr. Ulrich Rückert, a researcher at Bielefeld University’s Cluster of Excellence CITEC and the Faculty of Technology, is working to better understand the human brain with the help of computer-based models. This project is taking place throughout the European Union – the goal of which is to gather findings on the brain and make new connections with this information. 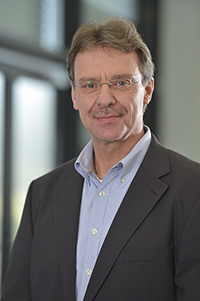 The HBP is set to run for total of ten years, until 2023. The project is divided into different subphases: the third (and current) phase will run from 2018–2020, and the fourth phase is planned for 2020–2023. With each phase, project groups are required to submit proposals for continued funding. This project, which Bielefeld University is contributing to, has been evaluated as “very good” and a total of 1.19 billion Euro has been budgeted for the EU project.

It is clear, for instance, that nerve cells interact via electrical impulses. “In addition to this, the functions of individual regions of the brain are also known,” says Rückert. But it is not clear how the molecular level of the brain relates to its larger structures. “In this area, there’s still a big gap,” says the engineer.

The goal of the overarching project is to gather knowledge about the human brain and forge connections with this information. This knowledge is meant to serve the fields of medicine and computer science in particular: if researchers succeed in simulating the brain as accurately as possible, neurological diseases such as Alzheimer’s or Parkinson’s, for instance, could be better understood – or perhaps even cured. The efficacy and side effects of medications could also be tested with computer-based models.

In HBP, Ulrich Rückert deals with associative memory, conducting research on neuronal networks. “This is about developing a new architecture for computers,” he says. Computers can make things incredibly efficient, such as playing chess or solving computational tasks. “They are always good when there are set rules and structures,” says Rückert.

The human brain, however, works in a completely different way: it is very good at putting different things together in relationships. “When we go into a room, for example, we know right away where we are and where we are located in the space,” says Rückert. “For a computer, on the other hand, this would be a very complicated computational operation.”

The brain operates under very different principles than a computer does. “A computer often needs 1000x more energy than the brain for such operations,” says Rückert. “If we can simulate how the brain works, then the energy usage of technical systems could be reduced in many areas.” This applies to very different systems in robotics, such as autonomous driving. “Energy supply has thus far been a major problem with this,” says Rückert. As he explains, “one solution could be having certain processes such as orientation run more energy efficiently.”

The brain is not particularly fast, but it is efficient in using energy. “For a single operation, a computer is faster” says Rückert. “But a big strength of the brain is that different processes run in parallel and are linked with each another.” In HBP, the models for this are primarily virtual, but they are also replicated in analog form.

Currently, Rückert has been given the task of assessing the neuronal models from two research groups in Heidelberg and Mannheim. “We are working closely together and are having intensive exchange with the individual groups in the project” says Rückert. “I’m really looking forward to the results.”