An international team of physicists from Bielefeld University, Uppsala University, the University of Strasbourg, University of Shanghai for Science and Technology, Max Planck Institute for Polymer Research, ETH Zurich, and the Free University Berlin have developed a precise method to measure the ultrafast change of a magnetic state in materials. They do this by observing the emission of terahertz radiation that necessarily accompanies such a magnetization change. Their study, titled ‘Ultrafast terahertz magnetometry’, is being published today (25.08.2020) in Nature Communications.

In the new study together with their international colleagues, Professor Dr Dmitry Turchinovich (left) and Wentao Zhang demonstrate how the ultrafast change of magnetic states can be measured. Photo: Bielefeld University/M.-D. Müller
Magnetic memories are not just acquiring higher and higher capacity by shrinking the size of magnetic bits, they are also getting faster. In principle, the magnetic bit can be ‘flipped’—that is, it can change its state from ‘one’ to ‘zero’ or vice versa—on an extremely fast timescale of shorter than one picosecond. One picosecond (1 ps = 10-12 s) is one millionth of one millionth of a second. This could allow the operation of magnetic memories at terahertz (1 THz = 1 x 1012 hertz) switching frequencies, corresponding to extremely high terabit per second (Tbit/s) data rates.

‘The actual challenge is to be able to detect such a magnetization change quickly and sensitively enough,’ explains Dr Dmitry Turchinovich, professor of physics at Bielefeld University and the leader of this study. ‘The existing methods of ultrafast magnetometry all suffer from certain significant drawbacks such as, for example, operation only under ultrahigh vacuum conditions, the inability to measure on encapsulated materials, and so on. Our idea was to use the basic principle of electrodynamics. This states that a change in the magnetization of a material must result in the emission of electromagnetic radiation containing the full information on this magnetization change. If the magnetization in a material changes on a picosecond timescale, then the emitted radiation will belong to the terahertz frequency range. The problem is, that this radiation, known as “magnetic dipole emission”, is very weak, and can be easily obscured by light emission of other origins.’ Wentao Zhang, a PhD student in the lab of Professor Dmitry Turchinovich, and the first author of the published paper says: ‘It took us time, but finally we succeeded in isolating precisely this magnetic dipole terahertz emission that allowed us to reliably reconstruct the ultrafast magnetization dynamics in our samples: encapsulated iron nanofilms.’ 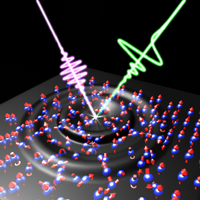 As this illustration shows, the researchers were able to measure the magnetization dynamics in the iron nanofilm caused by ultrafast electronic and acoustic processes. Image: Bielefeld University/W. Zhang

In their experiments, the researchers sent very short pulses of laser light onto the iron nanofilms, causing them to demagnetize very quickly. At the same time, they were collecting the terahertz light emitted during such a demagnetization process. The analysis of this terahertz emission yielded the precise temporal evolution of a magnetic state in the iron film.

‘Once our analysis was finished, we realized that we actually saw far more than what we had expected,’ continues Dmitry Turchinovich. ‘It has already been known for some time that iron can demagnetize very quickly when illuminated by laser light. But what we also saw was a reasonably small, but a very clear additional signal in magnetization dynamics. This got us all very excited. This signal came from the demagnetization in iron—actually driven by the propagation of a very fast pulse of sound through our sample. Where did this sound come from? Very easy: when the iron film absorbed the laser light, it not only demagnetized, it also became hot. As we know, most materials expand when they get hot—and this expansion of the iron nanofilm launched a pulse of terahertz ultrasound within our sample structure. This sound pulse was bouncing back and forth between the sample boundaries, internal and external, like the echo between the walls of a big hall. And each time this echo passed through the iron nanofilm, the pressure of sound moved the iron atoms a little bit, and this further weakened the magnetism in the material.’ This effect has never been observed before on such an ultrafast timescale.

‘We are very happy that we could see this acoustically-driven ultrafast magnetization signal so clearly, and that it was so relatively strong. It was amazing that detecting it with THz radiation, which has a sub-mm wavelength, worked so well, because the expansion in the iron film is only tens of femtometres (1 fm = 10-15 m) which is ten orders of magnitude smaller,’ says Dr Peter M. Oppeneer, a professor of physics at Uppsala University, who led the theoretical part of this study. Dr. Pablo Maldonado, a colleague of Peter M. Oppeneer who performed the numerical calculations that were crucial for explaining the observations in this work, adds: ‘What I find extremely exciting is an almost perfect match between the experimental data and our first-principles theoretical calculations. This confirms that our experimental method of ultrafast terahertz magnetometry is indeed very accurate and also sensitive enough, because we were able to distinguish clearly between the ultrafast magnetic signals of different origins: electronic and acoustic.’

The remaining co-authors of this publication have dedicated it to the memory of their colleague and a pioneer in the field of ultrafast magnetism, Dr. Eric Beaurepaire from the University of Strasbourg. He was one of the originators of this study, but passed away during its final stages.
Original publication:
Wentao Zhang, Pablo Maldonado, Zuanming Jin, Tom S. Seifert, Jacek Arabski, Guy Schmerber, Eric Beaurepaire, Mischa Bonn, Tobias Kampfrath, Peter M. Oppeneer and Dmitry Turchinovich: Ultrafast terahertz magnetometry. Nature Communications, https://www.nature.com/articles/s41467-020-17935-6,  DOI:10.1038/s41467-020-17935-6, published on 25 August 2020.
Futher information:
Website of the workgroup Terahertz Physics