Currently, it takes more than two hours to perform and evaluate a test for SARS-CoV-2—meaning that a laboratory can test only a very limited number of people per day. In a study with several cooperation partners, cell biologists at Bielefeld University have now developed a method that delivers results around ten times faster. ‘The test takes only about 16 minutes,’ says Professor Dr Christian Kaltschmidt from Bielefeld University’s cell biology research group. ‘The method is also cheaper than conventional tests.’ 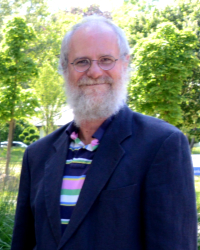 Because there is still no vaccine or therapy for SARS-CoV-2, tests play an important role in controlling its spread. However, they currently take a relatively long time. Prof. Dr Christian Kaltschmidt and other researchers have tested a method that works much faster. Photo: Marcel Mompour
More than ten million coronavirus infections have now been confirmed worldwide. An effective vaccine or therapy for SARS-CoV-2 is not yet available. On top of this: not every infected person develops symptoms. Therefore, testing is currently the most effective method of curbing the spread of the virus: those who are infected are then isolated and no longer spread the virus.

The most common procedure for testing whether someone has become infected with SARS-CoV-2 is a so-called PCR test. These use the genetic material of the virus as a basis. This is also what the Bielefeld scientists did in their study. PCR tests always follow a similar pattern. First, genetic material is needed from a test person. This is usually obtained by a smear test in the mouth, nose, or throat. ‘If a person is infected with SARS-CoV-2, the sample will also contain genetic material from the virus in the form of what is called RNA,’ said Kaltschmidt. The RNA molecules are isolated in a chemical process. However, the sample does not contain enough RNA for a test to detect it immediately. Therefore, it has to be amplified.

Method saves not only time but also effort
This is done with a so-called polymerase chain reaction—which is what gave the PCR method its name (polymerase chain reaction). It is carried out in a device called a thermal cycler. This raises and lowers the temperature according to a predetermined program. In the presence of certain additives, an enzyme with a copy function, and stability at high temperatures, the genetic material multiplies until there is enough to detect SARS-CoV-2—if someone is infected.

The Bielefeld researchers used a special thermal cycler—the NEXTGENPCR—for their process. Thanks to the special design including several temperature zones, reactions in the device run particularly effectively and fully automatically. ‘We have oriented the procedure towards the so-called Drosten protocol of the Berlin Charité and the protocol of the Center of Disease Control and Prevention in Atlanta,’ says Kaltschmidt. These are standards for SARS-CoV-2 tests. Using their method, the researchers were able to repeat the results of conventional PCR tests—only in a much shorter time and with less effort. 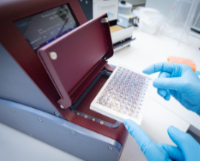 Whether a person is infected with SARS-CoV-2 can be detected in tests. The genetic material is multiplied in a thermal cycler. The thermal cycler used in the new study (see photo) enables around 570 analyses per hour. Photo: Bielefeld University/M.-D. Müller
Special device can analyse 570 tests per hour
The thermocycler was developed by the Dutch company Molecular Biology Systems B.V. For the coronavirus tests, the developers wrote software that reduces both the time required and the number of steps involved. ‘We received a lot of positive feedback,’ said Gert de Vos, founder and CEO of Molecular Biology Systems. The device can analyse several samples in parallel—this means that a single thermal cycler can be used to analyse around 570 samples per hour. Molecular Biology Systems is now working with governments and private laboratories in Africa, Europe, the Middle East, and the USA.

Kaltschmidt sees many advantages in the new process. For example, such a test could be used especially where rapid results are required. ‘When cruise ships resume operations, for example, they could test each person in a short time before they board the ship.’

Other participants in the study were the Heart and Diabetes Center NRW in Bad Oeynhausen, the molecular neurobiology research group at Bielefeld University, the Evangelisches Klinikum Bethel, and the Forschungsverbund Biomedizin Bielefeld OWL e.V.