Whether cancer cells or galaxies: the universe is full of irregular structures. Mathematicians in the International Research Training Group (IRTG) at Bielefeld University and Seoul National University (South Korea) are searching for hidden laws in random systems. On Friday the 7th of October, the IRTG will open officially under the title ‘Searching for the regular in the irregular: Analysis of singular and random systems’. Guests include the South Korean Spokesperson of the IRTG, Professor Panki Kim from Seoul, and Kyoungae Mun, Director of the Korean Education Center at the Korean Embassy in Berlin. Ceremonies commence at 15.30 in Lecture hall E0-002 in Bielefeld University’s Building X. 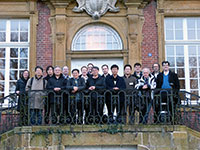 Scientists from South Korea and Bielefeld carrying out research together in the International Research Training Group for mathematics. Photo: Rebecca Reischuk
The first nine doctoral students to start work at the new IRTG in October come from Belarus, Cameroon, China, Croatia, Denmark, and Germany. They will be spending two and one-half years of their three-year doctoral training programme at Bielefeld University; for the other six months, they will be living and carrying out research in Seoul. In return, eight doctoral students from Seoul will be coming to Bielefeld for six months. ‘The exchange programme does not just enable doctoral students to gain international experience; it also stimulates the flow of knowledge between the two universities,’ according to Professor Moritz Kaßmann, the Spokesperson for the IRTG in Bielefeld.

Nineteen experts from Germany and South Korea are supervising the joint research programme. Some of them have both personal and academic contacts going back several years. For example, Kaßmann and Jongchun Bae, a doctoral student of his Korean colleague Kim, have recently published an article together. Exchange intensified during the four joint workshops during the planning phase of the IRTG. ‘Seoul National University is a renowned partner. Our research interests fit together very well, and by working together we can supplement each other’s competencies,’ says Kaßmann.

At the Opening Event, he will give a talk on ‘Doctoral education in East-Westphalia and East-Asia’. Professor Dr. Michael Röckner, Dean of the Faculty of Mathematics and Spokesperson for the earlier IRTG with the University of Beijing (2006–2014), will report on his many years of experience in training international doctoral students in mathematics. The academic lecture will be given by Professor Takashi Kumagai from Japan, Mercator Fellow of the IRTG. Welcoming addresses will be given by not only Panki Kim and Kyoungae Mun but also Professor Dr. Martin Egelhaaf, Vice-rector for research at Bielefeld University and Professor Dr. Herbert Dawid from the Bielefeld Graduate School in Theoretical Sciences (BGTS), the head organization for doctoral programmes in the theoretical sciences at Bielefeld University. The music programme underscores the ties between South Korea and Germany: The Korean cellist Yoonha Choi, who is a member of the Bielefelder Philharmoniker, will provide the musical accompaniment.

The German Research Foundation (DFG) is funding the new International Research Training Group with approximately 780,000 Euro per year until at least the 1st of April 2021. In Bielefeld, up to ten doctoral students can be admitted every two years.

Members of the press are cordially invited to report on the event.

Posted by EBernard in General
Kommentare: