Four individuals who have rendered outstanding services to Bielefeld University are to be honoured at the 2017 Annual Reception on the 29th of September. The University is introducing two new honorary categories: the Badge of Honour and the Medal of Honour. These join the existing Honorary Senators and Honorary Citizens of the University. ‘Up to now, we have exclusively honoured the founder generation. Now, however, we are getting ever closer to the 50th anniversary of the University in 2019, and we realize that it is time to honour a new generation of individuals who have been rendering outstanding services to the University for many years,’ explains the Rektor, Prof. Dr.-Ing. Gerhard Sagerer, who is proposing to honour these individuals together with Dr. Matthias Buschmeier, the Deputy Head of the Senate.

Honorary Senator: This honours individuals who have rendered outstanding services to the University. Their work has brought the University both national and international recognition or created the conditions that have made this possible. The honour is bestowed by the Senate, and this is the first year that it has been bestowed on a woman. 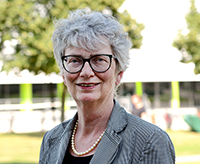 Prof'in Dr. Katharina Kohse-Höinghaus. Photo: Universität Bielefeld
The ambassadress: Prof. Dr. Katharina Kohse-Höinghaus
Katharina Kohse-Höinghaus is being honoured as an outstanding scientist who has remained loyal to Bielefeld University since her appointment as Professor of Physical Chemistry in 1994. She even declined the offer of a professorship at Princeton, USA. She embodies all the qualities of a successful researcher: procurement of high levels of third-party funding, participation in cooperative research projects, high-ranking publications, and international networking. Her outstanding international reputation in her specialized field of combustion chemistry is documented by honours, guest professorships, and lecture invitations from across the world. Last year, she was also awarded three high-ranking honours in China. For many years, Katharina Kohse-Höinghaus has also represented the interests of science in broader contexts such as the Senate of the German Research Foundation and the Helmholtz Association as well as the presidency of the internationally renowned Combustion Institute. In 2012, the German Federal President appointed her to the German Council of Science and Humanities (Wissenschaftsrat). She is a member of the German National Academy of Sciences (the Leopoldina), the National Academy of Science and Engineering (acatech), and the Academies of Science in both Göttingen and North Rhine-Westphalia. Kohse-Höinghaus is the founder of the teutolab extracurricular facility for secondary school pupils (2000 in her subject of chemistry). This has served as an impetus for numerous extracurricular laboratories for pupils in both Germany and abroad. For this pioneering work, she was awarded the Federal Cross of Merit on Ribbon from the German Federal President.

Honorary citizen: This honours individuals who have rendered outstanding services to Bielefeld University. Their activities have helped Bielefeld University to build up and strengthen its national and international renown as an excellent location for research and teaching. The honour is bestowed by the Senate. 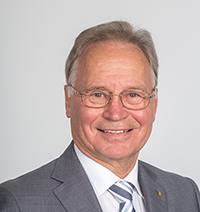 Ortwin Goldbeck. Photo: Goldbeck GmbH
The builder of bridges between the University and business: Ortwin Goldbeck
Ortwin Goldbeck – a qualified engineer and founder of the construction company bearing his name – is being honoured for his outstanding services to Bielefeld University and Bielefeld as a city of science over the past 20 years. This can be seen most clearly in his engagement as the president of the Westfälisch-Lippischen-Universitätsgesellschaft (now named the Universitätsgesellschaft Bielefeld [Bielefeld University Society]) from 2000 to 2012 and as president of the Chamber of Industry and Commerce in Bielefeld (2006 to 2014). His central ambition was to achieve a well-functioning transfer between the University and business on many levels. He posed questions, campaigned for understanding on both sides, and mediated between the different ‘worlds’. He strived particularly to make the strengths of the University in research and teaching visible in new and intensive ways within broad circles of business and society in East Westphalia-Lippe. This all the more remarkable, because for many years, both the city and the region had difficulties relating to the University because of the strong emphasis on basic research in its profile. Goldbeck’s dedication was a very important building block in achieving the fundamental relationship of trust on which today’s University can build its manifold contacts and forms of exchange with business and society. In 2014, Goldbeck was the first donor and promoter of the endowed professorship ‘Führung von Familienunternehmen’ [management of family businesses]. Ortwin Goldbeck is a member of the Board of Trustees of the Studienfonds OWL Foundation, and Goldbeck GmbH is one of the three corporate partners of the Bielefeld Marketing GmbH Science Office.

Badge of Honour: This honours individuals who have rendered outstanding services to Bielefeld University. These go markedly beyond what is to be expected of them in their posts. The honour is bestowed by the Senate.

Johanna Soufi. Photo: Universität Bielefeld
The Chairwoman of the Staff Council (1992 to 2015): Johanna Soufi
Soon after Johanna Soufi began working as a chemical engineer at the Faculty of Chemistry in 1979, she dedicated herself to the interests of the staff – first within the ÖTV trade union (now verdi) and from 1987 onwards, as a member of the Staff Council. From 1992 to 2015, she was the full-time Chairwoman responsible for the interests of both technical and administrative staff. Her work was characterized by her exceptionally strong identification with Bielefeld University. She was committed to the well-being of both the staff and the University as a whole in equal measures, and she exercised this responsibility with great seriousness and dedication. Her personal integrity and professional competence were acknowledged from all sides, making her a trusted representative of many members of the University staff. The University management appreciated her constructive cooperation and the tenacity with which she strove for clarity and found solutions to complex situations.

Medal of Honour: This honours individuals who have rendered outstanding services to Bielefeld University. Their activities have helped build bridges between the University and society or given exceptional support to research and teaching. The honour is bestowed by the Senate. 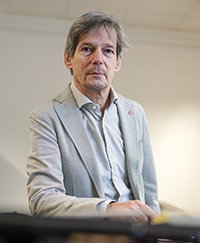 Dr. Michael Hoyer. Photo: Markus Paulussen Fotografie
The director of the University Orchestra: Dr. Michael Hoyer
Dr. Michael Hoyer became the voluntary director of Bielefeld University Orchestra in 1980 and continued this work when it was made a university teaching position in 1989. As a professionally trained conductor and musicologist, he has succeeded over many decades in introducing musical laypersons to the great works of musical history. At the same time, his work with the orchestra has also been dedicated to music outside the mainstream repertoires. The orchestra has long been an irreplaceable part of the cultural life at Bielefeld University, and each of his regular concerts attracts numerous listeners from outside the University. The same applies to his chamber music series. Through Hoyer’s contacts in the music world, this is a particularly popular venue for gifted young musicians. Michael Hoyer’s secret lies not only in his technical ability and his musicological expertise but above all in his enthusiasm and his infectious optimism that also does not shy away from what might seem overpowering challenges. He has now presented three major operas with hardly any funding. With his exemplary commitment that is immediately apparent to all, Michael Hoyer succeeds not only in inspiring all those involved on such occasions for the music but also in bringing them together to master the major organizational work tasks. One can only say that Michael Hoyer’s work is characterized by decades of unequalled idealism.

Further information:
All previous honours conferred by Bielefeld University at a glance:
www.uni-bielefeld.de/(de)/profil/geschichte-und-ehrungen/ehrungen/Ehrenbuerger_insert.html