New Collaborative Research Centre: The individual and its ecological niche

« Spin current from... | Startseite | The biological clock... »
Published on 28. November 2017, 16:21 h
Bielefeld University and the University of Münster cooperate in Transregio consortium

A new Transregio Collaborative Research Centre (CRC/TRR) with the abbreviated name ‘NC3’ will link the sub-disciplines of behavioural biology, ecology, and evolutionary biology. Its goal is to elucidate how animals succeed by individually adapting to their environment and thereby finding and exploiting their individualised ecological niche. The German Research Foundation (DFG) has now approved funding for CRC/TRR 212. Starting in January 2018, it will be supporting this new direction in research with a total of roughly 8.5 million Euros. The behavioural ecologist Professor Dr. Oliver Krüger from Bielefeld University is the speaker; the evolutionary biologist Professor Dr. Joachim Kurtz from the University of Münster, assumes the role of vice-speaker. 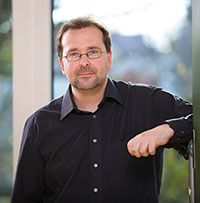 Prof. Dr. Oliver Krüger. Photo: Bielefeld University
Individuals differ from each other. This seemingly trivial statement – already expressed 2400 years ago by Aristotle – stands for a new vision in organismic biology that is addressing the diversity of living creatures and their relationships. ‘This notion shifts the focus away from means and other averaged data for a population or species. It emphasises instead that animals inherit but also develop their own individual abilities. Due to these individual abilities, they differ in how they cope with their environment,’ says Oliver Krüger.

‘Our goal is to redefine the niche concept on the level of the individual,’ says Krüger. The scientists are studying both the genetic make-up of animals just as much as their behavioural adjustments which result in specific phenotypes. Joachim Kurtz explains: ‘The central assumption is that the interaction between individual phenotypes and the environment leads to individualised niches, and this development involves three processes of adaptation and adjustment: niche choice, niche conformance, and niche construction.’ Scientists with different backgrounds will be working together on this topic across nineteen sub-projects. They do not just come from behavioural biology, ecology, and evolutionary biology. Further disciplines involved in the CRC are, for example, philosophy, statistics, and theoretical biology.

The guiding principle that individual animals differ has exerted a major influence on research in several sub-disciplines of biology. For example, behavioural biology has established the concept of the animal personality in order to study stable differences in the behaviour of individuals across time and contexts. Ecology is currently emphasizing that individual animals, plants, and micro-organisms specialise, and that this means that the ecological niche of a species or a population is structured more subtly than previously reported. In evolutionary biology, differences between individual members of a species or population have always been significant. However, it places more emphasis on the interaction between genes and environment today: ‘The phenotypes to which the genetic constitution leads depend more strongly on the environment than had been assumed for a long time,’ says Kurtz.

Collaborative Research Centres are long-term, university-based research institutions in which researchers work together within a multidisciplinary research programme. They are financed by the German Research Foundation (DFG) and allow researchers to tackle innovative, challenging, complex, and long-term research questions. Ideally, funding lasts for twelve years, broken down into three four-year funding periods. Two or three universities can apply for a Transregio Collaborative Research Centre (in short: CRC/TRR) together and then carry out research as roughly equal partners in the consortium.

Through the approval of CRC/TRR 212, Bielefeld University has now four Collaborative Research Centres (CRC). In the CRC 1288, researchers in several disciplines including history, sociology, and literary studies are working on practices of comparing. CRC 1283 is carrying out research on randomness from the perspective of mathematics. The physicists in CRC/TRR 211 are studying strong-interaction matter under extreme conditions (together with Goethe University Frankfurt and Technische Universität Darmstadt).