Beginning in January 2017, “Comparative Practices,” the new Collaborative Research Center 1288 (CRC, Sonderforschungsbereich) at Bielefeld University, will be funded by the German Research Foundation (Deutsche Forschungsgemeinschaft), first for the next four years. The German Research Foundation announced its decision to provide nearly 9 million Euro in funding on 21 November 2016. The CRC, which was evaluated in September, is an interdisciplinary research group of scholars from the fields of history and literary studies, art history, Romance studies and English-language studies, philosophy, law, and political science, as well as inter-American studies. The Center also works closely with the Bielefeld Graduate School in History and Sociology (BGHS) and the Center for Interdisciplinary Research (Zentrum für interdisziplinäre Forschung). History Professor Dr. Angelika Epple serves as speaker of the CRC. 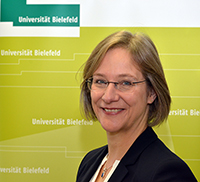 According to CRC speaker Prof. Dr. Angelika Epple, “Comparisons are ubiquitous – but how we change the world when we make comparisons has been largely neglected by previous research.” Photo: Bielefeld University
Whether it is ratings or rankings, competitions, or casting shows, public comparisons are a pervasive phenomenon in today’s world. Many modern sciences are also based on explicitly comparative methodologies. Up to this point, however, much about comparative practices has remained largely unknown, including the history and societal and cultural causes, as well as the way comparisons work and the impact they have. The CRC “Comparative Practices” thus focuses its attention on the act of comparison itself, pursuing the question of what it is that people do when they make comparisons.

This CRC research consortium investigates how historically variable comparative practices are integrated in routines, rules, habits, institutions, and discourses, as well as how these practices can create structures and initiate change. “Following our thesis, comparative practices are subject to historical change, but they also contribute to historical transformation in a way that has to this point been underestimated,” explains Professor Dr. Angelika Epple, speaker of the new CRC.

The long-term research goal of the cooperative project is to more precisely describe comparative practices, including the types of barriers standing in the way of making comparisons, as well as the organizing and transformative power of comparison. “In the first phase of funding, we will further identify and specify the overarching question of historical change. We will concentrate on the kinds of comparative practices that reach back to ancient traditions, which arose in a globally interconnected Europe and in the Americas. According to this thesis, these comparative practices made a fundamental contribution to the creation of the ‘Western’ model of modernity during the era of the 16th–20th centuries,” says Epple. “In the next 12 years, we would like to initiate new ways of thinking about history, society, and historical transformation with our research on the organization and dynamics of modern and supposedly non-modern societies.”

Collaborative Research Centers are long-term research consortia at institutions of higher learning established to promote cooperation among academic researchers on interdisciplinary research projects. They are funded by the German Research Foundation. By bringing together and coordinating existing resources at an institution of higher learning, CRCs enable researchers to address challenging and complex long-term research projects. In addition to this, CRCs also provide support to early-career researchers and promote equality among scholars. The total length of the funding is 12 years in ideal cases, with each funding period lasting for four years.