Leaf beetles: Even a tiny dose of pesticide will impair reproduction

The number of insects in Germany is declining rapidly – in the state of North Rhine-Westphalia alone, it has dropped by three-quarters within only 25 years. In a new study, biologists at Bielefeld University show the effects of pesticides and how even slight traces lead to long-term damage to beetles. One finding is that leaf beetles lay roughly 35 per cent fewer eggs after coming into contact with traces of a frequently used pesticide – a pyrethroid. The researchers also showed that female offspring develop malformations through the poison. The biologists have published their study in the journal ‘Environmental Pollution’. 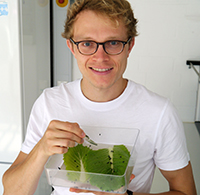 Dr. Thorben Müller is studying how pesticides affect leaf beetles. This research was supported by Bielefeld University’s Young Researchers’ Fund. Photo: Bielefeld University
According to the Federal Ministry for the Environment, in some parts of Germany the insect population has declined by 80 per cent since 1982. In North Rhine-Westphalia, the Regional Office for Nature, Environment, and Consumer Protection (LANUV) reports a decline of 75 per cent between 1989 and 2013.

‘Recent years have seen a continuous increase in the use of herbicides,’ says Professor Dr. Caroline Müller, head of the Department of Chemical Ecology. One problem is that ‘up to now, little was known about how pesticides affect insects outside the cultivated fields. What are the consequences for organisms randomly exposed to traces of pesticides?’ asks the ecologist. When the chemicals are sprayed, they can spread to neighbouring areas and contaminate adjacent plants. ‘The wind also potentially carries them to ecologically-cultivated fields that are meant to be managed without poisons,’ says Caroline Müller.

The new study shows that pesticides can interfere with communication between insects. When choosing their mating partners, mustard leaf beetles (Phaedon cochleariae Fabricius) rely on chemical stimuli, which enable them to recognize potential mates. Hydrocarbons on the surface of the beetle body act as a type of scent that serves as an identity mark.

‘For the first time, we have been able to show that contact with pesticides changes this chemical signature on the body surface,’ says Dr. Thorben Müller, the main author of the study. ‘As a consequence, beetles may fail to recognize suitable mating partners for reproduction. This alone may already reduce the number of offspring.’

In their new study, the Bielefeld biologists show that leaf beetles produce fewer offspring when they come into contact with even just traces of pesticides. The pictures show a leaf beetle larva and the adult insect. Photo: Bielefeld University
In addition, when parents come into contact with pesticides, this can have negative effects on the subsequent beetle generation – even when these do not come into direct contact with the substance themselves. ‘The offspring of beetles that have eaten leaves contaminated with pesticides develop more slowly than the offspring of beetles that have fed on untreated leaves,’ says Thorben Müller. However, it is not just the development of offspring that is delayed. ‘Female leaf beetles whose parents had contact with such chemicals develop antennae of different length. This malformation can impair partner choice and the choice of egg laying places.’

The results of this research may also be transferred to other insects. ‘Bees and wasps communicate in a similar way to beetles by using chemical signals’, says Professor Dr. Caroline Müller. ‘If they incidentally come into contact with traces of pesticides, this could also influence their mate selection and lead to a decline in offspring.’ From the present findings, she concludes that ‘herbicides should be authorized only when it is certain that they will not damage the development and reproduction of untargeted organisms in the long term.’