Two Bielefeld mathematicians have just received exceptional international honours: Professor Dr. Friedrich Götze has been elected as a foreign member of the Lithuanian Academy of Sciences and Professor Dr. Michael Röckner has been awarded a 3-year visiting professorship at the Chinese Jiangsu Normal University. 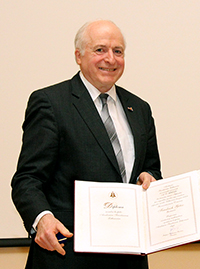 Prof. Dr. Friedrich Götze
The Lithuanian Academy of Sciences – a non-governmental body – has elected Götze as a foreign member to honour his scientific achievements and his close ties to Lithuania. Already back in the 1980s when Lithuania was still part of the Soviet Union, Götze was attending conferences and giving lectures there. Young academics from Lithuania have worked at the two Collaborative Research Centres at Bielefeld University’s Faculty of Mathematics.

Professor Dr. Friedrich Götze is considered to be one of Germany’s leading experts in stochastics. The 63-year-old has been carrying out research and teaching at Bielefeld University’s Faculty of Mathematics since 1984. His research addresses probability theory, mathematical statistics, and number theory. It was only in August this year that Götze was awarded the Order of Orange-Nassau from the King of the Netherlands.

Professor Dr. Michael Röckner is becoming a member of the Institute of Mathematical Sciences at the Jiangsu Normal University in China for the next three years. The Bielefeld mathematician will be travelling to the big city of Xuzhou with its 4 million inhabitants several times a year. He will not only be giving lectures and seminars but also teaching master and doctoral students specializing in probability theory. ‘The university is very liberal and has a good atmosphere,’ reports Michael Röckner after his first visit. ‘It wants to build up its international profile.’ The Vice-President of the Jiangsu Normal University was a Humboldt Fellow in Germany. 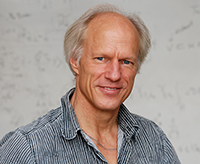 Prof. Dr. Michael Röckner (Photo: Bielefeld University)
Michael Röckner has been Professor of Mathematics at Bielefeld University since 1994. His main field of research is stochastic analysis and, in particular, the mathematical modelling of stochastic dynamics when working on research questions in biology, chemistry, physics, and economics. In September this year, he was elected Vice-President of the German Mathematical Society (DMV).