iGEM competition: First runner up to world champion for Bielefeld

Many months of laboratory work, numerous challenges, and, finally, good reason to celebrate: Ten students from Bielefeld University have been taking part in this year’s International Genetically Engineered Machine competition (iGEM) organized at the Massachusetts Institute of Technology (MIT) – and they gained second place (First Runner Up). They had already won the European region preliminary round (11–13 October) with their construction of a microbial fuel cell to generate energy directly from bacteria. The final World Championship Jamboree was held from 1–4 November at the MIT in Boston, USA. The Bielefeld team competed successfully against 80 teams from all over the world. Professor Dr.-Ing. Gerhard Sagerer, Rektor of Bielefeld University was openly delighted at the success of the young researchers. ‘I heartily congratulate the Bielefeld team for this fantastic result. This very good achievement underlines the international level of research and teaching at Bielefeld. And I wish to thank the students for helping to make Bielefeld University even more visible throughout the world.’

The iGEM team from Bielefeld University after becoming First Runner Up in the iGEM competition at the Massachusetts Institute of Technology in Boston: Thorben Meyer, Nadiya Romanova, Anna Korszańska, Manuel Schüler, Nils Christian Lübke, Matthias Ruwe, and Tom Tubbesing (back row from the left); Lukas Rositzka, Tore Bleckwehl, Sebastian Grenz, Fabian Thomas, and Timo Wolf (front row from the left). Photo: iGEM-Team Bielefeld
‘Second place is a tremendous success,’ enthused team member Tore Bleckwehl after the end of the Jamboree on 4 November. ‘It’s simply incredible and the culmination of a year of hard work.’ Teams from all over the world had entered the final round of the largest student competition for synthetic biology – including those from renowned higher education institutes such as Yale University (USA) or Imperial College London (Great Britain). ‘We are on a par with these universities, as the European region preliminary round and now the final round has shown,’ says iGEM team member Lukas Rositzka. ‘We don’t have to see ourselves as being in any way inferior to the big names.’ The Bielefeld team is one of seven German teams to make it to the finals. Although this is the fourth year running that Bielefeld University has taken part in the iGEM competition, it has never done so well before. In the last two years, both Bielefeld teams made it into the ‘Sweet Sixteen’ – the 16 best teams.

Generating energy from bacteria
The Bielefeld iGEM team entered the competition with the goal of constructing a functioning microbial fuel cell that would use bacteria to generate energy. Apart from one difference, such an environmentally friendly fuel cell functions in principle in exactly the same way as a traditional battery. Just like a normal battery for domestic use, a microbial fuel cell consists of two separate units, the anode and cathode compartments. These two compartments are separated by a semi-permeable membrane, the proton exchange membrane. However, the microbial fuel cell differs from a traditional battery in that the anode compartment does not contain electrolytes but bacteria. These convert substrate, in this case sugar, through metabolic reactions. This produces electrons that are transferred to the anode and finally – over an external circuit – to the cathode. The external circuit is the application driven by the fuel cell such as a lamp or a small motor. By this process, bacteria can be used to generate electricity. 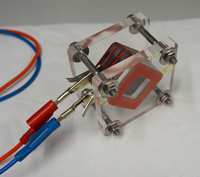 It was constructing a microbial fuel cell that made Bielefeld University’s iGEM team so successful in the competition. One potential future use of such fuel cells could be to generate energy from sewage sludge. Photo: iGEM-Team Bielefeld
The Bielefeld students did not just succeed in reaching the goal they had set themselves; they also managed to genetically modify Escherichia coli – the bacteria used in the fuel cell – and make the electricity generation even more efficient. The team did not overlook biosafety and also developed a genetic safety system that prevents the bacteria from being released into the environment.

It’s not just lab work that counts
The iGEM competition has been organized at MIT every year since 2004.  What started as a course at MIT has steadily attracted more and more participants, from five teams in 2004 to over 210 this year. Alongside experimental work in the laboratory, the students are also responsible for running public relations, recruiting sponsors, and organizing events. The competition also awards special prizes for particularly good work in special sub-domains of the project and in the project presentation. At the final jamboree in Boston, the Bielefeld team were not only ‘First Runner Up’, but were also awarded the prize for the best ‘Food & Energy’ project. ‘Taking part in the iGEM was a great experience for all the team, and something we would recommend to everybody,’ summarizes Rositzka. ‘Because you have to organize a complete project in the competition, you learn things that would simply not be possible in a regular study course. It was a great deal of work, but at least just as much fun.’