How plant metabolites affect the ecosystem

Plants are often very individual when it comes to their specific defence chemicals and other metabolites. Such chemical diversity (chemodiversity) can be found both in different plants of the same species and within an individual plant. The German Research Foundation (DFG) is providing a Research Unit led by Bielefeld University with around two million euros in funding to explore the chemodiversity of plants. The chemical composition of plants can impact the foodwebs of a plant as well as its environment and biological interactions. Spokesperson for the DFG Research Unit is Professor Dr Caroline Müller from the Faculty of Biology at Bielefeld University; her deputy is junior professor Dr Meike Wittmann, also from the Faculty of Biology. 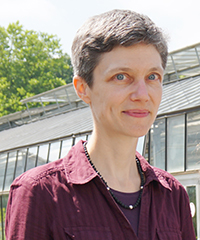 Professor Dr Caroline Müller heads the new DFG Research Unit on chemodiversity in plants. Photo: Bielefeld University
The new Research Unit ‘Ecology and Evolution of Intraspecific Chemodiversity in Plants’ aims to gain a better understanding of chemodiversity and analyse the extent to which it varies within individual plants, between individuals of a population and between populations. Ten professors from seven universities and research institutions will be working together in the unit.
‘Many plant species have an astonishingly high degree of chemodiversity,’ says Caroline Müller, who heads Bielefeld University’s Chemical Ecology Working Group. ‘This applies not only to many ecologically important species, but also to plants that are of economic importance, such as potatoes, cereals, or maize.’

When plants grow, they produce chemical metabolites. They can kill yeasts, bacteria, and insects, for example, with toxic substances. The composition of metabolites even differs within an individual plant. For instance, metabolites produced in the blossoms are different to those found in the plant’s roots. ‘The chemical composition within a plant also changes during the course of the season,’ explains Müller. ‘This enables a plant to defend itself, for example, against the cold in winter and against certain predators in summer.’

‘The chemodiversity of a plant species can have a tremendous impact on other organisms in its environment, such as fungi with which it lives in a symbiosis or pathogenic bacteria.’ Their chemodiversity likewise affects the foodwebs to which the plants belong. This in turn influences biodiversity, i.e. the diversity of ecosystems and species, as well as genetic diversity within species.
‘I was surprised that previous studies of the relationships between plants, herbivores, and pollinators often ignored plant chemodiversity,’ says Caroline Müller. The new Research Unit will therefore focus on acquiring new basic knowledge about chemodiversity. Researchers from various disciplines, including experts in chemical and molecular ecology, biochemistry, and evolution, will be collaborating to accomplish this.

In addition to four working groups at Bielefeld University, six other working groups are involved. They are from the Max Planck Institute for Chemical Ecology (Jena), Helmholtz Zentrum München (German Research Centre for Environmental Health), the University of Hohenheim, the German Centre for Integrative Biodiversity Research (iDiv) Halle-Jena-Leipzig, Friedrich Schiller University Jena, Philipps-Universität Marburg, and the Technical University of Munich.

The DFG funding for the Research Unit on chemodiversity runs for three years starting in 2020.

Professor Dr Caroline Müller has been conducting research at Bielefeld University since 2007. Her working group studies the function of natural substances in the communication between individuals of the same and of different species, and how they influence ecological interactions. Among other research topics, the biologist heads a subproject in the Transregional Collaborative Research Centre NC3, which explores animals and their individual niches.