How can green technologies come out on top?

« How refugees live | Startseite | Bielefeld and Paderb... »
Published on 21. Juli 2020, 15:35 h
An economic study is examining what prevents companies from producing in eco-friendly ways. Governments must take these barriers into account if they want to promote alternative processes.

Industrial companies are fighting to survive as a result of the coronavirus pandemic. One suggestion is to support the German economy by linking environmental and climate targets with economic stimulus packages. What chance does climate policy have of influencing technological change towards green technology? This is one of the questions posed by a study at Bielefeld University’s Faculty of Business Administration and Economics. It is using a model to imitate the economy of a typical state in the European Union.

‘The model simulates competition between an established conventional technology and a green entry-level technology,’ says Professor Herbert Dawid. His chair is developing computer-based models of economic development. The current study extends a model developed in an EU project involving Bielefeld scientists under Dawid's leadership (Eurace@Unibi). Green technologies do not just include renewable energies but all production methods that use energy and materials more efficiently and thus conserve resources better than the established alternative.

Kerstin Hötte and Herbert Dawid are using computer-based simulations to explore how policy measures can promote climate-friendly technologies. Photo: Mike-Dennis Müller
An economy to experiment with
A computer simulation of the new model runs through various scenarios to determine how a new ‘green’ technology stands up against a conventional ‘brown’ technology. The simulated economy is starkly simplified. It consists of 80 companies that produce consumer goods and two technology companies: one offering a brown solution and the other a green alternative. In addition, there are two private banks, a central bank, the government of the country, and 1,200 households. Members of the households work in the companies and spend money on products as consumers.

Economist Kerstin Hötte, a colleague of Herbert Dawid, developed the model in her dissertation. ‘All the actors in the simulations are assigned certain properties and pursue their own goals,’ says Hötte. For example, one of the things a company pays attention to is saving costs and generating profits. 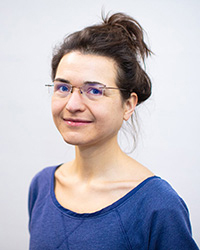 ‘Many companies first have to build up the necessary know-how before they can use green technology. Subsidies can provide an important impulse for this,’ says economist Kerstin Hötte. Photo: Mike-Dennis Müller
Why don’t companies discard the ‘brown’ technology?
‘Nowadays, industrial companies have a number of technologies at their disposal that they can use to manufacture their products in a more eco-friendly way,’ says Hötte. These include, for example, the use of renewable energies and resource-conserving materials, but also increases in efficiency that reduce the amount of energy and materials they need. ‘Nonetheless, companies often stick to CO2-intensive processes for years.’

‘One obstacle to acquiring and using alternative systems can be that the company finds it difficult to convert.’ If, for example, an energy company has relied on coal power for decades, it lacks the necessary know-how to use renewable energies. To build up this new knowledge, the company needs not only well-trained specialists but also knowledge based on experience—something that cannot be bought on the labour market.

‘Whether a company invests in green technology is also influenced by how productive the new plants are,’ explains Hötte. ‘An energy-saving machine, for example, can have the disadvantage that it is less technically mature and requires more labour, and this increases labour costs.’

The impact of taxes and subsidies
The scientist simulated the model thousands of times in the computer and changed individual parameters for each series of experiments. Each of the calculations simulates how the actors interact over several years. In one experiment, Hötte tested how political regulations affect the spread of green technologies in companies. The result is that ‘the success of a political measure depends on what it is targeting. Climate taxes such as the CO2 tax, for example, can give companies an incentive to invest in green technology even though it is less productive than conventional technology. Lower productivity means higher labour costs per unit produced. However, the climate tax offsets the financial disadvantage.

However, the analysis indicates that subsidies can also be useful. ‘They are particularly effective as a price support when demand for an emerging green technology such as solar power is low. They are also effective if a company lacks the know-how to use the sustainable technology,’ says Kerstin Hötte.

The evaluation of the simulation shows how important it is to carefully weigh up the effects of climate taxes and subsidies on the more long-term development of the economy, says Herbert Dawid. ‘It is also crucial to keep the respective political measures in place over a longer period of time. Companies need planning security. Otherwise investing in a new technology becomes a financial risk.’

The research data on the net
The data from the study on green technologies are available online. These include the program code of the model, the raw data of the simulation—several gigabytes—and the statistical analysis files. Kerstin Hötte enlisted advice for the publication from the Competence Center for Research Data. This is a cooperation between the University Library and the Bielefeld IT Service Centre (BITS). The employees of the centre, which was founded in November 2018, helped Hötte to compile her research data in such a way that other scientists are able to access it for their own research. ‘For me, the publication also has the advantage that there is an archive version of the data that I can use for follow-up studies, for example,’ says Hötte. ‘It also helps to be able to refer to the data publication when reviewing research articles.’

•    The data in the ‘PUB’ repository at Bielefeld University
•    The Competence Center for Research Data: data.uni-bielefeld.de


Posted by FFollmer in General
Kommentare: