From Avatar Assistants, to Robots as Therapy Aides

Alexa, Siri, Cortana, and the Google Assistant are all examples of agents – artificial systems capable of autonomous behavior. Humanoid robots and avatars also belong to these types of agents. Human interact with these agents as if they had their own needs and intentions. The international “Human Agent Interaction” (HAI) conference brings together researchers from cognitive robotics and artificial intelligence, as well as cognitive science and neuroscience to discuss research on agents. After having been held in Japan (2013 and 2014), South Korea (2015) and Singapore (2016), the conference is now being held in Europe for the first time, from 17–19 October. 150 researchers from 12 countries will attend the conference at Bielefeld University’s Cluster of Excellence Cognitive Interaction Technology (CITEC).

The HAI conference deals with artificial agents – systems that are capable of autonomous behavior such as Flobi, which is used as both an avatar (pictured) and as a robot. Photo: Bielefeld University
“HAI is one of the most innovative conferences on human-agent interaction in the world. This is in part because the conference is not limited to individual disciplines such as robotics, but instead integrates research from different approaches,” says Professor Dr. Wrede, who is one of the conference organizers. “This expectation of wide-ranging scientific research is also one of the reasons why we were able to bring the conference in Bielefeld: the Cluster of Excellence CITEC is well known for its interdisciplinary work.”
The scheduled program of the three-day conference includes two keynote lectures, six workshops, 13 technical sessions (“oral sessions”) and two poster sessions.
Workshops: Robots as Personal “Protective Cover” and the “Caring Apartment”

One of the HAI conference workshops looks at how robots can be used to support therapy for patients with anxiety disorders. At a workshop on Tuesday, 17 October, computer scientist Kazunori Terada, PhD, from Gifu University, Japan, will present the “mobile personal space,” which helps people who suffer from social anxiety disorder to have contact with other people. The robotic shell serves as a protective cover, and is equipped with cameras and loud speakers. Patients can thus talk to other people in a sheltered way. Seeing their conversation partner’s appearance stylized as an animated character helps these sufferers of social anxiety disorder.

How can an intelligent apartment both perform numerous tasks at the same time and assist several people without disrupting the other tasks and people? Another workshop on Tuesday deals with this kind of “multi-centric interaction.” Privatdozent Dr. Sven Wachsmuth, who heads CITEC’s Central Lab Facilities, will introduce the topic. Dr. Patrick Holthaus, of the University of Hertfordshire (United Kingdom) and who until recently conducted research at CITEC, will present the cognitive robotic service apartment in the CITEC Building. The “caring apartment” provides support to its guests to do this, it communicates with the apartment’s service robot.

Keynotes on Communication Pathways of Agents and Language Acquisition in Robots 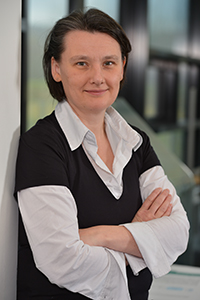 Prof. Dr. Britta Wrede, deputy CITEC-coordinator, is one of the organizers of the “Human Agent Interaction” conference. Photo: Bielefeld University

In his keynote lecture on Thursday, 19 October, Professor Dr. Alexander Waibel from the Karlsruher Institut für Technologie (KIT, Karlsruhe Institute of Technology) and the Carnegie Mellon University, Pittsburgh (USA), will discuss artificial agents that communicate not only in several spoken languages, but also with facial expressions and gestures. He will go into how avatars (artificial characters), for instance, are suitable as personal assistants and as facilitators for communication with other people.

Typically, robots have to be given the appropriate vocabulary for their environment. Professor Takayuki Nagai, PhD, from the University of Electro-Communications in Tokyo, Japan, has found a way for robots to autonomously acquire words that are important for their surroundings. To do this, the robots evaluate their raw sensory data, such as what what they “hear” and “touch,” and also take into account what people say in situations. Nagai will discuss this research in his keynote lecture on Friday, 20 October.