First discover the disorder and then find the patients

The sequencing of the human genome has made it possible: nowadays scientists can discover potential disorders for which there are no known patients. Such a disorder is ‘MPS III-E’, originally also called ‘Dierks’s disorder’ after its discoverer. Doctors at the Hadassah-Hebrew University Medical Center in Jerusalem (Israel) found consistent symptoms of progressive blindness in three patient families that indicated the presence of a previously unknown genetic defect. Genome analyses at the University of Lausanne (Switzerland) delivered a candidate gene on which Professor Dr. Thomas Dierks from Bielefeld University had already published a research article in 2012. Studies by Dierks’ research team now revealed that these patients indeed suffer from ‘MPS III-E’.  The researchers are now presenting their analysis in the journal ‘Genetics in Medicine’, published by the Nature Publishing Group.

The biochemist Prof. Dr. Thomas Dierks is carrying out research on hereditary disorders and treatment concepts with a particular focus on defective enzymes and their replacement. Photo: Bielefeld University
Through biochemical studies and genetic analyses, it was finally possible to confirm the disorder in five patients from the Israeli families. ‘These persons have increasingly poor vision due to progressive retinal atrophy. They also develop an inner ear hearing impairment,’ reports Dierks. ‘These are the same symptoms – alongside others – that we also found among mice in our earlier studies.’

The scientists at Bielefeld had studied the disorder in mice. In these animals, they switched off the gene responsible for producing the enzyme arylsulfatase G. This ensured that the carbohydrate heparan sulfate could no longer be fully degraded. ‘As a result, the carbohydrate accumulated in the cells,’ explains Thomas Dierks. This accumulation takes place in the lysosomes, the ‘recycling plants’ of the cells. Due to this metabolic dysfunction, the breakdown also of other substances such as lipids and proteins gradually comes to a standstill. The accumulation then increases the size of the lysosome until it destroys the cell – and that brings about the disorder.

To make sure whether the mutated gene in the patients actually does lead to the enzyme defect, Dierks’ team studied the patient gene in a cell culture. This culture produced the enzyme (arylsulfatase G). They found that ‘the enzyme actually was seriously damaged. It is unable to break down the heparan sulfate,‘ says Dierks. 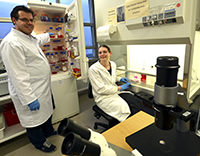 By studying the cell cultures, Dr. Björn Kowalewski and Mai-Britt Ilse confirmed that the patient’s mutated gene has lost it function. Photo: Bielefeld University
The researchers were surprised the first time they found out about the Israeli patients in April. ‘They did not start to show the symptoms before the age of 40. Based on our studies with mice, we assumed that the symptoms would emerge much earlier – perhaps after ten years,’ says Dierks. His explanation for this delay in the outbreak of the disorder is that large parts of the heparan sulfate molecule can be degraded without arylsulfatase G. ‘Hence, it takes more time to accumulate.’

Now that the cause of the symptoms is known, it is possible to think about an enzyme replacement therapy for the patients. ‘The required enzyme can be produced biotechnologically with the help of cell cultures,’ says Dierks. For the treatment, the enzyme is injected intravenously. It is then carried through the body in the blood and should break down the heparan sulfate in the tissues. ‘However, the brain is hard for the enzyme to reach. Moreover, the disorder has to be diagnosed through gene tests before the symptoms appear if treatment is to commence before damage has become irreparable.’ Now that the symptoms resulting from this hereditary disorder in humans are known, Dierks expects that the genetic defect will also be diagnosed in more people. ‘Further patients should be found particularly among the unexplained cases with Usher syndrome – this indicates a combined loss of vision and hearing.’