The European Research Council (ERC) has awarded an ERC Starting Grant to the Bielefeld mathematician Dr Dawid Kielak for his innovative approaches to research on geometric group theory, a field of mathematics. The European Union uses this award to promote early-career scientists with an excellent scientific track record who also show great promise. Dawid Kielak’s research will receive roughly 1.5 million euro over a period of 5 years. He is the second young academic at Bielefeld to be awarded this special grant within a year and the fifth researcher at Bielefeld University to receive an ERC grant - one of the most important lines of EU research funding. 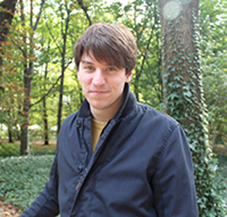 ‘Receiving an ERC Starting Grant confirms the relevance of research on the structures of geometric spaces - my specialization in geometric group theory,’ says the award winner Dr Dawid Kielak. This is how he explains his project: ‘In our daily lives, we humans have developed a trick that we use to understand four-dimensional space-time: we conceive it as three-dimensional space that changes over time. In my project, I am studying how we can apply a similar trick to understand geometries in even higher dimensions.’

Born in Poland, Dawid Kielak studied at Oxford (Great Britain) where he obtained his doctorate in mathematics. In 2017, he completed his post-doctoral habilitation at Bielefeld University where he continues to do research and teach as a post-doc. Further stages in his academic career have been the Institute of Mathematics of the Polish Academy of Sciences in Warsaw and the University of Bonn.
The ERC Starting Grant is awarded to young researchers at the beginning of their independent scientific careers in the first seven years after completing their PhDs. Applicants must have already published their own work as first authors and shown their potential to be a research leader by, for example, editing special issues in international scientific journals.

The following four scientists at Bielefeld University Bielefeld have been awarded an ERC grant in the past: