Doctors treat tumours mainly through surgery, radiotherapy, and chemotherapy. Over the next four years, a new project of Bielefeld University and 14 European partners will be studying targeted cancer treatments. The idea is that special molecules will track tumour cells in the body and then deliver an active agent that ensures that the cancerous cells are removed. Fifteen doctoral students will be working together in the ‘Magicbullet::Reloaded’ research network. The project is a cooperation between universities, research institutes, and industry. It is being funded by the European Union with a budget of around four million euro. 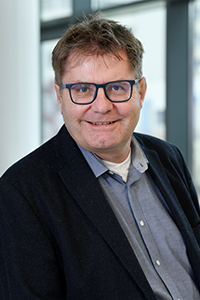 The chemist Professor Dr Norbert Sewald is coordinating the Magicbullet::Reloaded‘ research network in which 15 doctoral students will be working on less aggressive cancer drugs. Photo: Bielefeld University
In this project, the scientists are continuing the work of the ‘Magicbullet’ network. Between 2015 and 2018, this network developed the scientific basis for targeted cancer drugs that use peptide molecules to transport the anti-tumour agent.

‘What we want to do in the new network is to take this research further,’ says Professor Dr Norbert Sewald from Bielefeld University’s Faculty of Chemistry and the Center for Biotechnology (CeBiTec). Following on from ‘Magicbullet’, the chemist is now coordinating ‘Magicbullet::Reloaded’. In future, the researchers will not just be working exclusively on peptide conjugates (tiny protein molecules) and anti-tumour agents. ‘In addition to the peptides, we shall be directing our research towards further small molecules that can be combined with active agents and target tumour cells,’ according to Sewald. The second focus of the new project will be on the active agents: ‘This time, we are concentrating on drugs that can enable the immune system to recognize tumours as harmful and remove them.’

‘With this kind of drug, we can potentially treat tumours less aggressively than with, for example, conventional chemotherapy,’ says Dr Marcel Frese, a member of Sewald’s research team. Frese is working on implementing Magicbullet::Reloaded. ‘Chemotherapy generally applies active agents that damage cells. They should poison the cancer cells. However, the drawback is that they also damage healthy cells.’

The new project links together both basic and applied research. ‘At the universities and research institutes in the project, we are developing prototypes for future tumour therapies,’ says Norbert Sewald. ‘Our industrial partners will then test these prototypes in pre-clinical studies. The first results gained from Magicbullet are already very promising. However, we still have a very long way to go before clinical treatment can proceed, and we cannot expect that our conjugates will be on the market in the next few years.’

The EU Research Framework Programme is funding Magicbullet::Reloaded as a Marie Skłodowska-Curie European Training Network, ID: 861316. The goal of such training networks is to give structured training to outstanding doctoral students within the framework of excellent research projects. The name ‘Magicbullet’ comes from the Nobel Laureate Paul Ehrlich (1854–1915). He first suggested the concept of targeted agents that he also called ‘magic bullets’.

Further information:
•    Website of the new research network
•    research_tv-report on the prior project ‘Magicbullet’