CITEC team from Bielefeld University to compete with Pepper the robot

« Thermal spin current... | Startseite | Award-Winning Glasse... »
Published on 1. Juni 2018, 15:36 h
A team from Bielefeld University’s Cluster of Excellence CITEC will compete in the RoboCup world championship with Pepper, a humanoid robot. The competition will be held from 18-22 June in Montreal, Canada, where more than 400 teams from around the globe will come together to compete in a total of 12 leagues in four areas. The team from the Cluster of Excellence Cognitive Interaction Technology (CITEC), made up of students and two researchers, will compete with Pepper in the household service league, where service robots will show off their skills.

At CITEC, Pepper the robot is being prepped to interact with its surroundings. Photo: CITEC / F. Gentsch
In the RoboCup@Home household service league, teams demonstrate how well their robots can provide assistance in daily activities, such as those in the kitchen or the living room. The CITEC team is participating in the Social Standard Platform League (SSPL), a subleague of the household service league. In the SSPL, it is only possible to participate with Pepper, a robot produced by the company Softbank.

The Bielefeld students and researchers further developed Pepper’s software to enable the robot to react far more robustly to its environment. In competition, Pepper has to, for instance, serve as a waiter, bring groceries into the home, set the table, and find its way in unfamiliar surroundings.

“We want to make the capabilities that we are currently developing for Pepper possible on other robot platforms,” says Dr.-Ing. Sven Wachsmuth, who heads the Central Labs at CITEC and serves as coordinator of the team. “For example, we are working on how Pepper recognizes who it is that wants to interact with it. This is something we want to translate to other robots at CITEC.” 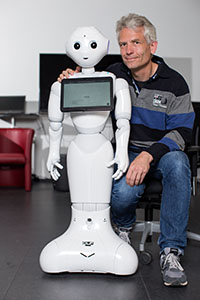 Dr.-Ing. Sven Wachsmuth coordinates the team. Photo: CITEC / F. Gentsch
In April, the CITEC team already competed in the household service league against eight international teams at the German RoboCup in Magdeburg. The Bielefeld team took fourth place and also received a certificate for the best performance with Pepper the robot.
The aim of the RoboCup competition is to accelerate the development of self-learning robots. Applications from the household league can be used to develop service robots. In addition to the household service league, other teams at RoboCup compete in soccer and industry leagues, as well as a league for human rescue scenarios.

This year, there are nine students on the team from the Bachelor’s degree program “Cognitive Informatics” and the Master’s degree program “Intelligent Systems.” The team is advised by Dr.-Ing. Sven Wachsmuth and his research associate Florian Lier from the Cluster of Excellence CITEC at Bielefeld University. The Bielefeld team has been participating in RoboCup competitions since 2009, and in 2016, they won the title of world champion in the household service league.