Chips that mimic the brain

Novel microchips imitate the brain’s information processing in real time. The neuroinformatics Junior Professor Dr. Elisabetta Chicca from the Center of Excellence Cognitive Interaction Technology (CITEC) at Bielefeld University together with colleagues from Zurich University, the Swiss Federal Institute of Technology Zurich (ETH), and the Max Planck Institute for Brain Research in Frankfurt am Main have shown, how complex cognitive abilities can be incorporated into electronic systems made with so-called neuromorphic chips: They show how to assemble and configure these electronic systems to function in a way similar to an actual brain. The researchers published their results online on Monday 22 July 2013 in the online edition of the renowned journal ‘PNAS’.

No computer works as efficiently as the human brain – so much so that building an artificial brain is the goal of many scientists. Neuroinformatics researchers from Bielefeld, Zurich and Frankfurt have now made a breakthrough in this direction by understanding how to configure so-called neuromorphic chips to imitate the brain’s information processing abilities in real-time. They demonstrated this by building an artificial sensory processing system that exhibits cognitive abilities.

New approach: simulating biological neurons
Most approaches in neuroinformatics are limited to the development of neural network models on conventional or super-computers. Few pursue the Zurich researchers’ approach which aims at replicating the information processing performed by biological neurons and synapses directly onto real-time fully parallel analog circuits that are implemented on microchips. 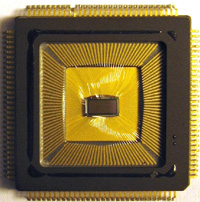 Junior Professor Dr Elisabetta Chicca from Bielefeld University and her colleagues developed multi-neuron chips that mimic the functions of an actual brain. Photo: Universität Bielefeld
The major challenge was to configure networks made of artificial, i.e. neuromorphic, neurons in such a way that they can perform particular tasks, which the researchers have now succeeded in doing: They developed a neuromorphic system that can carry out complex sen-sorimotor tasks in real time. They demonstrate a task that requires a short-term memory and context-dependent decision-making – typical traits that are necessary for cognitive tests. In doing so, the INI team combined neuromorphic neurons into networks that implemented neural processing modules equivalent to so-called “finite-state machines” – a mathematical concept to describe logical processes or computer programs. Behavior can be formulated as a “finite-state machine” and thus transferred to the neuromorphic hardware in an automated manner.

Chips can be configured for any behavior modes
The scientists thus demonstrate for the first time how a real-time hardware neural-processing system where the user dictates the behavior can be constructed. Junior Professor Dr Elisabetta Chicca developed several of the microelectronic circuits used in the neuromorphic systems. She was also involved in developing the theoretical foundations and in the implementation of the study.  At present she is utilising the methods from the study in the recently formed research group ‘Neuromorphic Behaving Systems’, which belongs to the Center of Excellence Cognitive Interaction Technology (CITEC).

For the project she collaborated, amongst others, with Giacomo Indiveri, Professor at the Institute of Neuroinformatics (INI) and ETH Zurich. “Thanks to our method, neuromorphic chips can be configured for a large class of behavior modes. Our results are pivotal for the development of new brain-inspired technologies,” Indiveri sums up. One application, for instance, might be to combine the chips with sensory neuromorphic components, such as an artificial cochlea or retina, to create complex cognitive systems that interact with their surroundings in real time.

Further informationen on the Internet:
www.nbs.cit-ec.uni-bielefeld.de