The Chinese government has conferred the highest national honour for foreign experts, the National Friendship Award of the People’s Republic of China, on the Bielefeld chemist Professor Dr. Katharina Kohse-Höinghaus. The award is traditionally conferred in Peking to commemorate the 1st of October, the National Day celebrating the founding of the People's Republic of China. Together with eight further Germans, Kohse-Höinghaus received the award in the seat of government Zhongnanhai. 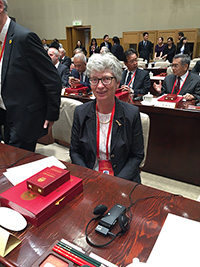 Prof. Dr. Katharina Kohse-Höinghaus shortly before the award ceremony in the Chinese seat of government. Photo: Bielefeld University
In January, Katharina Kohse-Höinghaus already received the Award for International Scientific Cooperation of the Chinese Academy of Sciences (CAS). For about twelve years, she has been intensively involved in supervising the development of knowledge in China in her specialization: combustion research. She has held honorary professorships or been a member of the advisory boards at three renowned Chinese universities.

Kohse-Höinghaus holds a chair in physical chemistry at Bielefeld University since 1994 and is involved in many high-ranking academic organizations: she is a member of the German Academy of Natural Sciences Leopoldina, Past President of the International Combustion Institute, and also a member of the German Council of Science and Humanities (Wissenschaftsrat) – the most important advisory body for science policy in Germany. In 2015, she was elected to the National Academy of Science and Engineering (acatech).

This is the second National Friendship Award to go to Bielefeld University. The first was bestowed on the mathematician Andreas Dress in 2012. The ‘National Friendship Award of the People’s Republic of China’ is the Chinese government’s highest honour for foreign experts conferred in recognition of their contribution to both the economic and cultural development of the nation.