Privatdozentin [senior lecturer] Dr. Nicole Colin, a temporary lecturer at Bielefeld University’s Faculty of Linguistics and Literary Studies, has been awarded the deutsch-französischer Parlamentspreis by the German Parliament and the French Assemblée Nationale. She is a professor at the University of Amsterdam. On 18 November she will be awarded the 10,000 Euro prize in Paris for her post-doctoral habilitation Deutsche Dramatik im französischen Theater nach 1945. Künstlerisches Selbstverständnis im Kulturtransfer [German drama in the French theatre since 1945: cultural transfer of an artistic self-concept]. 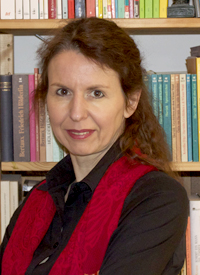 The literary scholar Prof. Dr. Nicole Colin from Bielefeld University has received the deutsch-französischer Parlamentspreis for her post-doctoral habilitation. Her thesis analyses the underlying process and the background to the enthusiastic reception of German playwrights in French theatre. Photo: Lino Stratmann
‘It’s fantastic to be awarded this prize,’ says Colin. ‘It shows that the book does not just have academic significance but social relevance as well – it’s what every academic aspires to.’ Colin’s study is part of a German Research Foundation (DFG) project on Franco-German cultural transfer headed by the Bielefeld Professor Dr. Klaus-Michael Bogdal. Colin gained her post-doctoral habilitation at Bielefeld University with it in February 2010. The book analyses the decisive influence of German-language drama on contemporary French drama.

Colin studied philosophy, modern German literature, and history at the University of Wuppertal where she also completed her doctorate in philosophy in 1993. Her post-doctoral habilitation qualifies her to teach modern German literature and comparative literature. The literary scholar is particularly delighted to receive a prize that has previously been awarded only to historians. ‘Fifty years ago, de Gaulle and Adenauer signed the Élysée Treaty. Receiving my prize in this anniversary year is a wonderful indication that it is not just politics and the economy that play a major role in Franco-German relations and in the broader process of European integration but culture as well,’ Colin stresses.

The German Parliament and the French Assemblée Nationale award the deutsch-französischer Parlamentspreis every two years to one German and one French citizen for academic work contributing to mutual understanding between the two nations. This year’s French award winner is Professor Dr. Nicolas Beaupré for his work Das Trauma des Ersten Weltkriegs von 1918 bis 1933 [The trauma of World War 1 from 1918 bis 1933].