An intelligent apartment for life

A new project, ‘KogniHome’, has been launched to develop a networked home that supports the health, quality of life and safety of families, people living alone and senior citizens. Fourteen project partners from Ostwestfalen-Lippe will be collaborating in the new regional innovation cluster ‘KogniHome’ over the next three years. The Federal Ministry for Education and Research (BMBF) is supporting the project until 2017 with eight million Euros of funding. KogniHome is led by CITEC, the Cluster of Excellence at Bielefeld University. Further partners include white goods manufacturer Miele, the v. Bodelschwingh Foundation and the company Hella, Lippstadt. The total amount of funding, including contributions from these project partners, amounts to 11.3 million Euros. 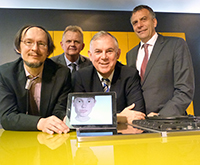 Presenting the new project KogniHome (from left): Prof. Dr. Helge Ritter, Prof. Dr. Günther Wienberg, Dr. Eduard Sailer and Prof. -Ing. Gerhard Sagerer.  The networked apartment will communicate with humans in the form of an avatar, as well as using other technologies. Centre, on screen: the avatar ‘Billie’. Photo: Bielefeld University
In the project, the partners from industry, research, service industries as well as social services and health providers address the question of how ‘intelligent’ and ‘trustworthy’ technical systems can be realised to help people in their everyday lives. As the basis of this technology is developed, the researchers are also confronted with questions of ethics, society and law. ‘We want to enrich people’s quality of life in the home with innovative and useful aids that improve the health and safety of their user,’ says Professor Helge Ritter of the Cluster of Excellence CITEC. He is also the spokesperson for the new innovation cluster KogniHome.
Professor Dr. Günther Wienberg, member of the board of the v. Bodelschwingh Foundation Bethel, expects that these new developments will benefit senior citizens and people with disabilities in particular. ‘Technology should enable them to have control over their own lives as long as possible. The aim is to live a long, independent life in your own home’, says Wienberg. The home needs to learn from its user and be able to adjust to new demands and phases of life. A prototype of the home will be set up in a building belonging to the v. Bodelschwinghschen Foundation Bethel.
The aim is that inhabitants be able to communicate with the networked apartments with everyday language and gestures. The apartment will, amongst other means, communicate with its inhabitants in the form of an avatar – a digital person. To support the health of its inhabitants, the apartment is able to detect and discreetly inform the user if he or she is not doing enough physical activity or needs to change their posture, making suggestions for improvement. If the apartment detects that the user could be overdoing it and needs to reduce physical activity it can also warn him or her. 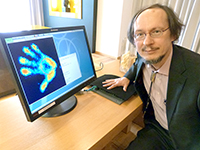 Researchers are also focussing on sensor technologies. Prof. Dr. Helge Ritter demonstrates ‘Myrmex’. The research prototype recognises differences in pressure made by objects placed on it. Photo: Bielefeld University
A ‘digital kitchen’ will accompany and assist the inhabitant in cooking activities by suggesting variations on recipes and warning if a dish is about to burn. ‘It is also possible to enable the kitchen to store the user’s cooking preferences and habits in order to build up a kind of ‘personalised cooking memory’, says Dr. Eduard Sailer, Head of Technology at the Miele Group. Automatic aids are also planned for outside the kitchen: An intelligent door could welcome visitors and remind the user of appointments and to take their keys with them. In the hall, an intelligent coatrack and mirror will, for instance, point out if you are wearing clothes suitable for the weather.

CITEC presented another new project, also an intelligent apartment, just a few months ago in March this year. This project, led by CITEC alone, networks a service robot with an intelligent apartment. The aim is that both apartments display social competence in the way they interact with the user. What distinguishes project KogniHome is that the apartment can support the user for a lifetime, learning from his or her needs and skills. Instead of using a service robot the KogniHome integrates the technology invisibly into the homely environment. The industrial companies supporting this project plan to use the results to develop products ready for the market.