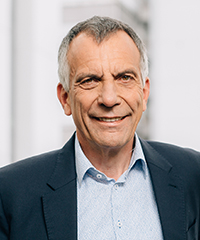 Prof. Dr.-Ing. Gerhard Sagerer (Photo: Bielefeld University/M.Adamski)
Professor Dr.-Ing. Gerhard Sagerer (63) has been elected as one of the four external members of the Foundation Board of the Universität zu Lübeck. The Ministry for Education, Science, and Culture of the State of Schleswig-Holstein is currently processing the appointment procedure. The term of office commenced in October 2019 and will run for an initial four years. The Foundation Board is responsible for all the tasks of the University Council stipulated in the Universities Act of the State of Schleswig-Holstein: these include making recommendations on university research profiles, focal areas of research and teaching as well as the structure of study courses, budgeting regulations, organizational and development planning, and the guidelines for allocating funding and other resources. The Foundation Board also participates in electing the president of the university. It held its inaugural meeting in November 2019. 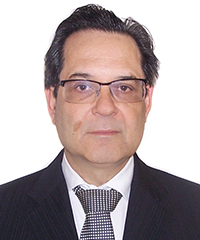 Prof. Dr. Marcelo da Costa Pinto Neves (Photo: Brasilia University)
Professor Dr. Marcelo da Costa Pinto Neves (62) from the University of Brasilia (Brazil) has been awarded a Humboldt Research Award. This 60,000-euro prize from the Alexander von Humboldt Foundation allows Neves to attend Bielefeld University and the Max Planck Institute for European Legal History in Frankfurt am Main as a visiting researcher. In Bielefeld, he is the guest of the Law and Society Unit at the Faculty of Sociology. Neves was nominated by Professor Dr Alfons Bora (Bielefeld University) and Professor Dr Thomas Duve (Max Planck Institute for European Legal History). The Humboldt Research Award is granted in recognition of a researcher's entire achievements to date to academics whose fundamental discoveries, new theories, or insights have had a significant impact on their own discipline and who are expected to continue producing cutting-edge achievements in the future. 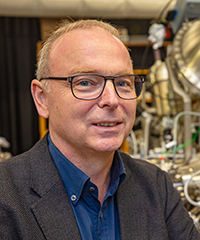 Prof. Dr. Armin Gölzhäuser (Photo: Bielefeld University/M.-D. Müller)
Professor Dr. Armin Gölzhäuser (57) has been appointed an AVS Fellow by the American Vacuum Society (AVS)—an appointment acknowledging significant scientific or technical achievements throughout his career. Gölzhäuser heads the research group Physics of Supramolecular Systems and Surfaces at Bielefeld University’s Faculty of Physics. He has been appointed an AVS Fellow for the discovery, development, and application of carbon nanomembranes. The AVS is an interdisciplinary professional society in New York City. It was founded in 1953 to bring together scientists who use ultra high vacuum technology in their experiments. Over the years, the workfield of the AVS has expanded greatly, and the AVS now organizes a host of scientific events on the topics of materials, interfaces, and processing. The designation ‘Fellow’ is awarded to experienced scientists who have been active in relevant fields for at least ten years. 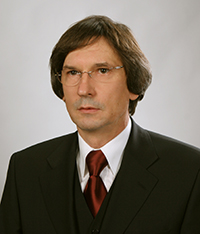 Prof. Dr. Krzysztof Redlich (Photo: K. Redlich)
Professor Dr. Krzysztof Redlich (66) from the University of Wroclaw (Poland) has been awarded an honorary doctorate by Bielefeld University’s Faculty of Physics. His research in the field of theoretical physics has made fundamental contributions to understanding the strong interaction between particles and studying them in relativistic heavy-ion collisions. He is a member of the Polish Academy of Sciences. In 2012 he was elected to the Academia Europea, and in  2013 he received the Smoluchowski-Warburg Prize. He is also one of the two Polish nuclear and particle physics representatives in the Scientific Policy Committee of CERN in Geneva and a member of the Scientific Council of the new international accelerator facility FAIR in Darmstadt. Between 1985 and 1988 as well as 1990 and 1994, Redlich was a research fellow at Bielefeld University’s Faculty of Physics. In 2001 and 2009, he was awarded research prizes from the Alexander von Humboldt Foundation that he used to work as a guest reseacher in Bielefeld. 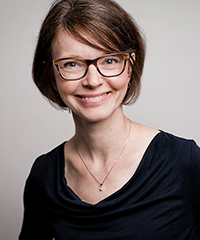 Priv.-Doz. Dr. Nadine Böhm-Schnitker (Photo: Katrin Biller Fotografie)
At the end of September, Privatdozent D. Nadine Böhm-Schnitker (44) was awarded the Habilitation Prize of the German Association for the Study of English. This was for her study ‘Senses and Sensations: Towards an Aesthetics of the Victorian Novel’. This English studies thesis links together literary and cultural studies and examines how perceptions are influenced and structured by the dominant media. In addition, Nadine Böhm-Schnitker reveals how these processes are reflected in the psycho-physiological literary criticism of the nineteenth century, thereby showing how current approaches such as distant reading or sensory studies can be traced back to this branch of Victorian literary theory. The habilitation thesis brings together ideological criticism and aesthetics to form a theory of perception. Nadine Böhm-Schnitker gained her doctorate and post-doctoral habilitation at the Friedrich-Alexander-Universität Erlangen-Nürnberg. Since the 2019 summer semester, she has been a research associate in British and American Studies at Bielefeld University.