A Specialist in Sensory Integration

Whether it is the lively activity of a festival, the vibe at the beach, or the chaos at the scene of an accident, the brain classifies these situations at lightning speed. To do this, the brain continuously sorts and combines the information it receives through the eyes, ears, and other sensory organs. Professor Dr. Christoph Kayser, a biologist and mathematician, researches how, and where in the brain, sensory information is integrated. Prof. Dr. Kayser previously headed a research group at the University of Glasgow (Great Britain), and has now accepted a professorship in Cognitive Neuroscience at Bielefeld University. His research is well known internationally: the European Research Council (ERC) provides 2 million Euros to fund his work through 2020. 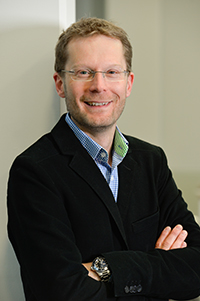 How does the brain understand how sensory impressions relate to each other – and why does brain sometimes get it wrong? Prof. Dr. Christoph Kayser investigates these questions. Photo: CITEC/Bielefeld University

“Our organs of thought are always combining information in order to come up with an image of the environment that is more or less correct,” says Christoph Kayser, the new head of the Cognitive Neuroscience research group, which will have nine researchers. The group is part of the Faculty of Biology and the Cluster of Excellence Cognitive Interaction Technology (CITEC) at Bielefeld University.

Of particular interest to Dr. Kayser are exceptional situations in which the brain fools itself and construes the environment incorrectly. This happens, for instance, in the ventriloquism effect: the puppet’s mouth is moving, but it is actually the ventriloquist who is imperceptibly doing the talking. “Our brain assumes that the spoken words are coming from the place where the lips are moving in sync. In this case, the brain uses this seemingly reliable information from the visual system – that is, how the puppet’s mouth is moving – and connects this with what is being heard,”explains the scientist. Kayser and his colleagues speak of “multisensory integration” when they talk about the brain’s ability of the brain to integrate sensory stimuli.

In his experiments, study participants hear, for example, a woman speaking with interfering noise in the background, such as that of a very lively public square. Sometimes they see the speaker, and at other times they don’t. Following this, the test subjects are asked what they understood. “The important point is that if the test subjects see the woman, they comprehend better, even though the background noise remains at the same level. Here, the areas of the brain that are responsible for sight attempt to understand the movements of the lips,” explains Kayser. In his studies, Kayser has been able to provide evidence of this by matching up observations of the test subjects with measurements of their brain activity.

Kayser measures what happens in the brain, and which areas of the brain are actively involved, using electroencephalography (EEG). The brain processes sensory information that it perceives through electrical signals, and the EEG measures these brain waves via sensors placed on the scalp. Kayser also uses magnetoencephalography (MEG) in his studies. A natural magnetic field arises from the electrical impulses in the brain, and the MEG measures how these magnetic fields are distributed over the surface of the head.

Kayser will apply his expertise in sensory integration to research being conducted at the Cluster of Excellence CITEC. His models could be used, for instance, to enable robots and avatars to make useful evaluations of the data that they measure in their surroundings.

Christoph Kayser studied mathematics at the ETH Zürich (Switzerland) from 1995–2000. He wrote his doctoral dissertation in neuroscience at the ETH Zürich on the question of how sensory information is coded in the visual system. In 2004, he completed his dissertation, and from 2004–2007, he worked as a postdoctoral researcher at the University of Tübingen. From 2008–2012, he headed a junior research group called “Neuronal Principles of Sensory Integration” at the Max Planck Institute for biological cybernetics in Tübingen. Kayser then headed a research group on integrated neuroscience at the University of Glasgow (Great Britain) from 2012–September 2017. At Bielefeld University, the 40-year old researcher will succeed Professor Dr. Marc Ernst, who moved to the University of Ulm.

Kayser is a member of the Royal Society for Biology (Great Britain). In 2015, Kayser’s research on the neuronal mechanisms of sensory perception was honored with a“Consolidator Grant”from the European Research Council, and is being funded through 2020. With this grant, the European Research Council supports promising researchers at the beginning of an independent career. Target groups include outstanding researchers whose own independent working group is currently in a phase of consolidation.