Japanese researcher on campus for 2019 CITEC Conference at Bielefeld University 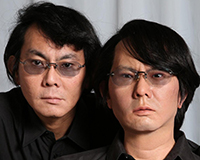 The science fiction drama “Sayōnara” is considered to be the first film with an android as an actor. “Geminoid F” portrays a faithful robot who stays at the side of young, sick woman after a nuclear contamination. The Geminoid F robot was developed by Japanese robotics researcher Professor Dr. Hiroshi Ishiguro, who became known worldwide after having constructed a robot doppelgänger of himself. “Science Cinema Special” will screen “Sayōnara” on Wednesday, 23 October, which will then be accompanied by a discussion with Dr. Hiroshi Ishiguro. The film will be shown at 7pm the Kamera Filmkunsttheater in Bielefeld as part of the pre-program of the CITEC Conference 2019.[Weiterlesen]
Posted by JHeeren in General
Tags: homepage
« Voriger Tag (10. Oktober 2019) | Startseite | Nächster Tag (12. Oktober 2019) »