With imprecise chips to the artificial brain

Researcher from Bielefeld University and international colleagues present their findings

Which circuits and chips are suitable for building artificial brains using the least possible amount of power? This is the question that Junior Professor Dr. Elisabetta Chicca from the Center of Excellence Cognitive Interaction Technology (CITEC) has been investigating in collaboration with colleagues from Italy and Switzerland. A surprising finding: Constructions that use not only digital but also analog compact and imprecise circuits are more suitable for building artificial nervous systems, rather than arrangements with only digital or precise but power-demanding analog electronic circuits. The study will be published in the scientific journal ‘Proceedings of the IEEE’. A preview was published online on Thursday, 1 March 2014. 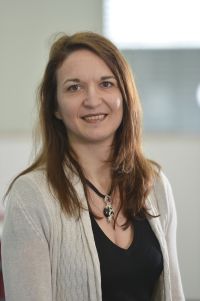 Junior Professor Dr. Elisabetta Chicca works on the development of artificial nervous systems. Photo: CITEC/ Bielefeld University
Elisabetta Elisabetta Chicca is the head of the research group ‘Neuromorphic Behaving Systems’. One of the aims of her work is to make robots and other technical systems as autonomous and capable of learning as possible. The artificial brains that she and her team are developing are modelled on the biological nervous systems of humans and animals. ‘Environmental stimuli are processed in the biological nervous systems of humans and animals in a totally different way to modern computers’, says Chicca. ‘Biological nervous systems organise themselves; they adapt and learn. In doing so, they require a relatively small amount of energy in comparison with computers and allow for complex skills such as decision-making, the recognition of associations and of patterns.’

The neuroinformatics researcher is trying to utilise biological principles to build artificial nervous systems. Dr. Chicca and her colleagues have been investigating which type of circuits can simulate synapses electronically. Synapses serve as the ‘bridges’ that transmit signals between nerve cells. Stimuli are communicated through them and they can also save information. Furthermore, the research team have analysed which type of circuit can imitate the so-called plasticity of the biological nerves. Plasticity describes the ability of nerve cells, synapses and cerebral areas to adapt their characteristics according to use. In the brains of athletes, for example, certain cerebral areas are more strongly connected than in non-athletes.

The four researchers also offer solutions for the control of artificial nervous systems. They present software on the basis of which programmes can be written that can control the circuits and chips of an ‘electronic brain’.

For her study, Elisabetta Chicca collaborated with her colleagues Chiara Bartolozzi PhD (Istituto Italiano di Tecnologia/ Italian Institute of Technology – IIT), Professor Dr. Giacomo Indiveri and Fabio Stefanini PhD (both at the Institute of Neuroinformatics, INI, in Zurich and the ETH Zurich).