Preventing the spread of cancer with copper molecules

Chemists at Bielefeld University have developed a molecule containing copper that binds specifically with DNA and prevents the spread of cancer. First results show that it kills the cancer cells more quickly than cisplatin – a widely used anti-cancer drug that is frequently administered in chemotherapy. When developing the anti-tumour agent, Professor Dr. Thorsten Glaser and his team cooperated with biochemists and physicists. The design of the new agent is basic research. ‘How and whether the copper complex will actually be given to cancer patients is something that medical research will have to determine in the years to come,’ says the chemist. 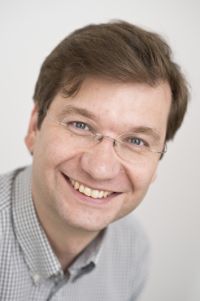 ‘Much of the research on anti-cancer drugs concentrates on variants of cisplatin. Our copper complex, in contrast, is a completely new agent,’ says Prof. Dr. Thorsten Glaser. Photo: Bielefeld University
Ever since the end of the 1970s, doctors have been using cisplatin to treat cancer. For lung cancer and testicular cancer, the drug promotes healing; however, it does not work for all types of cancer. Cisplatin is also one of the anti-cancer drugs that most frequently induce nausea, vomiting, and diarrhoea. ‘Therefore we wanted to develop an alternative agent that would work differently, have fewer side effects, and treat other types of cancer as well,’ says Thorsten Glaser, Professor of Inorganic Chemistry at Bielefeld University. ‘In addition, we wanted an agent that would treat cancers that have become immune to cisplatin through its use in earlier treatments.’ Glaser and his team are using methods from chemistry to produce new molecules that are not found in nature, and to equip these with specific properties.

Cisplatin attacks the DNA of cancer cells. DNA is composed of nucleobases, phosphates, and sugar. Whereas cisplatin binds with the nucleobases, the new molecule developed by the researchers attacks the phosphate in the DNA. ‘We did this by integrating two metal ions of copper in our molecule that preferentially bind with phosphates.’ As soon as the ions bind with the phosphate, the DNA of the cancer cell changes. This disrupts the cellular processes, prevents the cell from reproducing, and leads to the destruction of the pathological cell. ‘Just as a key only works in one specific lock, our molecule only fits the phosphates and blocks them,’ says Glaser. A bit like the end of a horseshoe, there are two metal ions of copper protruding from the new molecule. The gap between the two ends of the horseshoe corresponds exactly to that between the phosphates in the DNA so that they can dock together and form a perfect fit. ‘Because two phosphates bind simultaneously, the binding strength is greater. And that increases the efficacy.’ 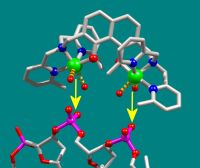 The new agent containing copper (above) ‘docks’ precisely with the DNA molecule (below) of a cancer cell and stops it from growing. As a result, the cancer cell dies. Photo: Bielefeld University
The scientists at Bielefeld University have developed a procedure for manufacturing the new molecule. They have proved that their copper agent can bind with DNA and change it. And they have studied whether and how well their agent prevents the spread of the DNA and thereby of the cells. The replication of the genome in cells proceeds in a similar way to a polymerase chain reaction (PCR). The researchers have confirmed that the copper complex stops this chain reaction.

When carrying out the research on the new agent, Professor Glaser and his team cooperated with the research teams of Professor Dr. Dario Anselmetti (Biophysics and nanoscience) and Professor Dr. Gabriele Fischer von Mollard (Biochemistry) – both also at Bielefeld University. Dario Anselmetti’s colleagues used atomic force microscopy to produce the images confirming that the copper complex binds with the DNA. Gabriele Fischer von Mollard’s team tested how the cancer cell culture responded to the agent.

The three research groups are cooperating within Collaborative Research Centre (CRC) 613 ‘Physics of Single-Molecule Processes and of Molecular Recognition in Organic Systems’.