Marriage of convenience with a fungus

Thanks to a fungus, the medicinal plant ribwort plantain gains a higher concentration of the defensive compound catalpol. Biologists at Bielefeld University report this discovery in a study to be published this Thursday (22.5.2014) in the scientific journal ‘Nature Communications’. The increase in catalpol gives the plant better protection against pests. In the study, the research team worked with arbuscular mycorrhizal fungi. These are known to colonize the roots of land plants. The plants benefit from this, because the fungus provides them with nutrients and minerals. However, are the impacts of this marriage of convenience with the fungus on plant chemistry equal for all plants? That is what the researchers wanted to find out. 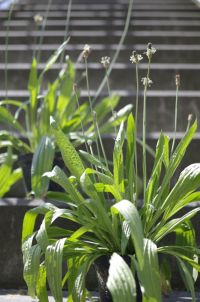 A Bielefeld research team confirms that a fungus is responsible for increasing the concentration of the defensive metabolite catalpol in the medicinal plant ribwort plantain. Photo: Bielefeld University
The fungus is associated with more than four-fifths of all land plants. Up to now, it was not clear whether this symbiosis has the same effect on all of them. ‘Previously, findings obtained with certain plant species were incorrectly generalized to other plant species. But it’s not as simple as that,’ says Professor Dr. Caroline Müller, who heads the Chemical Ecology work group at Bielefeld University’s Faculty of Biology. Her team has discovered that not all plants react to the fungus in the same way. ‘That’s even the case when the plant species are closely related,’ says Müller.

The scientists analysed five plant species and tested which substances to be found in the leaves increased or decreased when their roots were infected with the fungus. This allowed them to study the metabolism in the plants.

That the fungus increased the amount of catalpol in ribwort plantain was only one of the findings in the study. In bird’s-eye speedwell, the fungus led to hardly any changes in the concentration of catalpol. This defensive compound is not to be found at all in the other plant species, and the symbiosis with the fungus does not change this.

Professor Dr. Caroline Müller (left) and Rabea Schweiger have confirmed that even related plants react differently to the marriage of convenience with a fungus. Photo: Bielefeld University
The researchers also found a conspicuous difference in the concentration of citric acid and chemically related compounds. When the plants were infected with the fungus, the concentrations dropped notably in ribwort plantain, broadleaf plantain, bird’s-eye speedwell, and barrel medic. However, they tended to rise in annual meadow grass.

To carry out their study, the researchers dried and pulverized leaves from all five plant species. They then treated the powdered leaves of each plant with solvents, and analysed the resulting liquid samples with instruments that measure the concentrations of the individual substances. Finally, they analysed and compared the plant data with powerful computers. ‘This gave us what you could call a metabolic fingerprint for each plant,’ says Müller.

During their analyses, the scientists found that all the plants they tested had one thing in common: ‘They all had more phosphorus in their leaves when they were in symbiosis with the fungus,’ says the biologist Rabea Schweiger, who compared thousands of measured data for the study. However, here as well, each plant species functioned according to its own rules: ‘It was exciting to see that the metabolism of each plant species reacted completely differently to the fungus and the dose of phosphorus it gave them,’ says Schweiger.