How the brain leads us to believe we have sharp vision

We assume that we can see the world around us in sharp detail. In fact, our eyes can only process a fraction of our surroundings precisely. In a series of experiments, psychologists at Bielefeld University have been investigating how the brain fools us into believing that we see in sharp detail. The results have been published in the scientific magazine 'Journal of Experimental Psychology: General.' Its central finding is that our nervous system uses past visual experiences to predict how blurred objects would look in sharp detail. 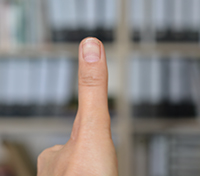 The thumbnail at the end of an outstretched arm: This is the area that the eye actually can see in sharp detail. Researchers have investigated why the rest of the world also appears to be uniformly detailed. Photo: Bielefeld University

"In our study we are dealing with the question of why we believe that we see the world uniformly detailed," says Dr. Arvid Herwig from the Neuro-Cognitive Psychology research group of the Faculty of Psychology and Sports Science. The group is also affiliated to the Cluster of Excellence Cognitive Interaction Technology (CITEC) of Bielefeld University and is led by Professor Dr. Werner X. Schneider.

Only the fovea, the central area of the retina, can process objects precisely. We should therefore only be able to see a small area of our environment in sharp detail. This area is about the size of a thumb nail at the end of an outstretched arm. In contrast, all visual impressions which occur outside the fovea on the retina become progressively coarse. Nevertheless, we commonly have the impression that we see large parts of our environment in sharp detail.

Herwig and Schneider have been getting to the bottom of this phenomenon with a series of experiments. Their approach presumes that people learn through countless eye movements over a lifetime to connect the coarse impressions of objects outside the fovea to the detailed visual impressions after the eye has moved to the object of interest. For example, the coarse visual impression of a football (blurred image of a football) is connected to the detailed visual impression after the eye has moved. If a person sees a football out of the corner of her eye, her brain will compare this current blurred picture with memorised images of blurred objects. If the brain finds an image that fits, it will replace the coarse image with a precise image from memory. This blurred visual impression is replaced before the eye moves. The person thus thinks that she already sees the ball clearly, although this is not the case.

The psychologists have been using eye-tracking experiments to test their approach. Using the eye-tracking technique, eye movements are measured accurately with a specific camera which records 1000 images per second. In their experiments, the scientists have recorded fast balistic eye movements (saccades) of test persons. Though most of the participants did not realise it, certain objects were changed during eye movement. The aim was that the test persons learn new connections between visual stimuli from inside and outside the fovea, in other words from detailed and coarse impressions. Afterwards, the participants were asked to judge visual characteristics of objects outside the area of the fovea. The result showed that the connection between a coarse and detailed visual impression occurred after just a few minutes. The coarse visual impressions became similar to the newly learnt detailed visual impressions.
"The experiments show that our perception depends in large measure on stored visual experiences in our memory," says Arvid Herwig. According to Herwig and Schneider, these experiences serve to predict the effect of future actions ("What would the world look like after a further eye movement"). In other words: "We do not see the actual world, but our predictions."
Original publication:
Arvid Herwig, Werner X. Schneider: Predicting object features across saccades: Evidence from object recognition and visual search. Journal of Experimental Psychology: General, http://dx.doi.org/10.1037/a0036781, published in October 2014 (print edition).
Further information available online:
www.uni-bielefeld.de/psychologie/ae/Ae01
Contact:
Dr. Arvid Herwig, Universität Bielefeld
Faculty of Psychology and Sports Science
Telephone: +49 521 106-4516
Email: arvid.herwig@uni-bielefeld.de
Professor Dr. Werner X. Schneider, Universität Bielefeld
Faculty of Psychology and Sports Science
Telephone: +49 521 106-4502
Email: wxs@uni-bielefeld.de
Posted by JHeeren in General
Tags: homepage
Kommentare: