Genome researchers from Bielefeld University’s Center for Biotechnology (CeBiTec) headed by Professor Dr. Alfred Pühler have succeeded in sequencing the genome of the Chinese hamster. The Chinese hamster supplies the cell cultures used by the pharmaceutical industry to produce biopharmaceutical products such as antibodies used in medicine. This costly project was only possible thanks to a cooperation between Bielefeld University and its international project partners. The researchers have now published their results in the internationally renowned scientific journal ‘Nature Biotechnology‘. 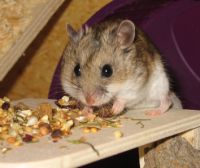 To carry out this project, the CeBiTec research team cooperated with the University of Natural Resources and Life Sciences in Vienna (where the project was headed by Professor Dr. Nicole Borth), the Austrian Centre of Industrial Biotechnology (acib), and two pharmaceutical companies: Novartis (in Switzerland) and Pfizer (in the USA).

Professor Dr. Thomas Noll, Scientific Director of CeBiTec, is confident that the data they have obtained will be of great interest to science and industry. ‘In future, the decoded hamster genome will greatly advance the use of cell lines to produce pharmaceuticals’, says Noll, who runs the Cell Culture Technology research group at the Faculty of Technology and participated in the research project.

The genome of the Chinese hamster is composed of eleven pairs of chromosomes. Decoding such a large genome calls for the generation of large datasets that then have to be processed with bioinformatics. To facilitate the resulting data analysis, the researchers in Bielefeld and their colleagues in this project applied a completely new procedure that sorts the single chromosomes of the genome. The sequencing of the hamster chromosomes was performed by Dr. Karina Brinkrolf at CeBiTec. More than 1.4 billion short DNA sequences were generated with the help of modern instruments for next-generation sequencing. ‘The major challenge in this project was subsequently piecing these short DNA sequences together to form single total sequences of chromosomes’, explains the head of the project Professor Alfred Pühler. This work can only be done with powerful computers. ‘We had to complete the new CeBiTec computer cluster and apply new software before we could determine the genome sequence’, says the bioinformatics expert Dr. Alexander Goesmann who also worked on the project. ‘By decoding the hamster genome sequence’, notes Goesmann, ‘bioinformatics at Bielefeld University has broken new ground.’ With approximately 2.3 billion bases, the magnitude of the genome sequence of the Chinese hamster is comparable to that of the human genome. 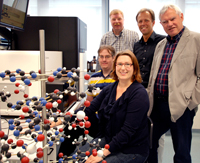 A CeBiTec research team has succeeded in sequencing the hamster genome in an international project. The photo shows the members of the team (in back from left to right) PD Dr. Andreas Tauch, Prof. Dr. Thomas Noll, Prof. Dr. Alfred Pühler, (in front from left to right) Oliver Rupp, and Dr. Karina Brinkrolf. Photo: Bielefeld University
The head of the project Alfred Pühler views this research as a milestone in the work at CeBiTec: ‘The decoding of the hamster genome successfully concludes a major CeBiTec project. The hamster sequence is available in the public domain and can be used for research throughout the world.’ The project greatly enhances the status of Bielefeld as a basis for current research on the cell cultures of the Chinese hamster, says Pühler. A further project has already been agreed with the University of Natural Resources and Life Sciences in Vienna and the Austrian Center of Industrial Biotechnology. ‘This places Bielefeld University in a good position to carry on contributing to this highly competitive field of research.’

For further information in the Internet, go to:
www.cebitec.uni-bielefeld.de
Posted by JHeeren in General
Tags: hp fo
Kommentare: