Cyberbullying: one in two victims suffer from the distribution of embarrassing photos and videos

Embarrassing personal photos and videos circulating in the Internet: researchers at Bielefeld University have discovered that young people who fall victim to cyberbullying or cyber harassment suffer most when fellow pupils make them objects of ridicule by distributing photographic material. According to an online survey published on Thursday, 19 July, about half of the victims feel very distressed or severely distressed by this type of behaviour. 1,881 schoolchildren living in Germany took part in the survey conducted by the Institute for Interdisciplinary Research on Conflict and Violence (IKG) and commented on their experiences with cyberbullying as a victim, offender or witness. 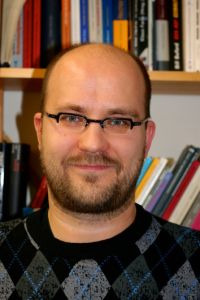 “Cyberbullying is not a trivial matter,” says Peter Sitzer of Bielefeld University. Sitzer and his colleagues have investigated the experiences of adolescents with attacks through the Internet or by mobile phone. Photo: Bielefeld University
Cyberbullying is the term used for attacks by one or more persons through the Internet or by mobile phone - where Facebook or an instant messenger, for instance, are used to denigrate or humiliate someone or harm their social relationships. A weaker person is the target of repeated and intentional attacks. For social scientists Dr Peter Sitzer, Julia Marth and their team, the purpose of the study is to describe the various aspects of this phenomenon.

One focal point of the online survey was the degree of distress felt by the victim related to the various forms of cyberbullying. The survey discovered that those affected find some forms of cyberbullying more distressful than others. For instance, more than half of the victims considered the posting of personal photos and videos distressful if it was aimed at humiliating them or making them the object of ridicule. The researchers put these findings down to the fact that the impact of this form of cyberbullying is difficult to control; digital photos and videos can often be duplicated and distributed any number of times and thus made available to a potentially unlimited audience. In contrast, derisive, insulting, abusive and threatening behaviour was perceived as very distressful or severely distressful only by about a quarter of the respondents. “This might be because this form of cyberbullying can be aimed directly at the victim. In this case, there are relatively few witnesses,” says Peter Sitzer. Another possibility is that the adolescents consider such attacks as normal, everyday behaviour among their peers.

The scientists also questioned the victims about the forms of cyberbullying they had experienced. Attacks through the Internet or by mobile phone, where they had been subjected to derision, insult, abuse or threats were reported especially frequently by the victims questioned. In many instances, the victims also claimed that rumours had been spread about them or hateful comments made. Schoolgirls among the victims claimed comparatively often that they had been the subject of cyberstalking and that, against their will, someone had wanted to talk to them about sex. Very little or no previous knowledge of the victim is required for these acts. Only very seldom did the victims questioned report deeds requiring additional knowledge. “It’s easy to send someone offensive messages by e-mail or instant messenger or post them on their wall, for example in Facebook,” says Sitzer. “But for a bully to be able to pass on private messages or confidential information to third parties in order to humiliate or ridicule the victim, he must have knowledge of such messages or information.”

The anonymous survey also gave the offenders of cyberbullying an opportunity to speak. They stated how they had attacked their victims in the Internet or by mobile phone. The offenders questioned reported most frequently that they had ridiculed, insulted, abused or threatened others. Defamatory behaviour and cyberstalking also received a frequent mention. While reports of being excluded from a group in the Internet were comparatively seldom among the victims, this form of cyberbullying was indicated frequently by the offenders. According to the researchers, one explanation for the discrepancy between the statements given by the victims and offenders could be that the victims often did not notice they had been excluded from a group. “Disparagements, however, are only hurtful when the victim perceives them as humiliating,” says Peter Sitzer. He presumes that there is a similar reason behind the fact that more offenders claimed to have forwarded personal photos and videos of others to third parties than was actually reported by victims. This is because in order to humiliate or ridicule a victim, it is not necessary for the victim to learn that embarrassing photos of him are being circulated.

“Our findings underline that cyberbullying is not a trivial matter but a serious problem which demands preventive countermeasures,” says Peter Sitzer. It is the task of parents, educationalists and teachers to teach schoolchildren how to behave in a socially responsible manner towards other users. At the same time, it is important that firm action be taken in cases of cyberbullying. More than half the offenders surveyed said that their attacks had not resulted in any negative consequences for them. However, the offenders also need help to change and refrain from making the attacks. In addition, the researchers point out that the victims of cyberbullying must be taken seriously and need help to overcome these experiences and return to an everyday life worth living.

The report on the findings of the online survey “Cyberbullying bei Schülerinnen und Schülern” (Cyberbullying among schoolchildren) is immediately available for download (in German) on the homepage of the project.

For further information in the Internet, go to:
www.uni-bielefeld.de/cyberbullying (in German)