The Bielefeld mathematician Professor Dr. Andreas Dress has been honoured with the 'International Science and Technology Cooperation Award' for his scientific achievements and for setting up the Max Planck Partner Institute for Computational Biology in Shanghai. This award, considered to be China's top award for international scientific cooperation, was given to Andreas Dress in a ceremony held on the 14th of February in Peking's Great Hall of the People. Andreas Dress taught and researched at Bielefeld University from its foundation in 1969 until his retirement in 2003. His scientific interests range from topology and classical algebra across structure formation processes and visualization procedures, to the application of combinatorics in biology and chemistry. 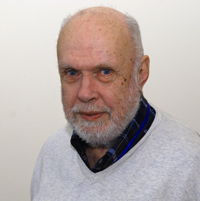 His Chinese students honour Professor Dr. Andreas Dress with the title 'Grandfather'.
The award has been given every year since 1994. It is China's most prestigious award in the field of science and research given to honour foreign persons and organizations who have made major contributions to China's development in the field of science and technology. Previous recipients include Germany's former Federal Minister of the Environment Professor Klaus Töpfer and the President of the Max Planck Society Professor Dr. Peter Gruss.

Professor Andreas Dress (born in 1938) studied mathematics in Berlin, Tübingen, and Kiel where he gained his doctorate in 1962 and his post-doctoral habilitation in 1965. He was a member of the Institute for Advanced Studies in Princeton, USA, for a total of 3 years and one of the first Professors of Mathematics at Bielefeld University. Dress has been a visiting scientist at many renowned universities and research institutes worldwide and is co-editor of several international journals. Since his official retirement in 2003, he has been a visiting scientist at the Max Planck Institute for Mathematics in the Sciences in Leipzig.

In 2005, at the age of  67, Andreas Dress took on the task of setting up a Max Planck Partner Institute in Shanghai as its founding director. This Partner Institute for Computational Biology (PICB ) is being jointly funded by the Max Planck Society (MPG) and the Chinese Academy of Sciences (CAS).

Dress ran the Department of Combinatorics and Geometry at the PICB, in which he specialized in the (re-) construction of kin relationships between living beings and the networked interaction of proteins and metabolites in healthy and diseased cells. The Department of Computational Genmonics run by his Chinese Co-Director Professor Li Jin is studying the molecular evolution of human populations and identifying the genetic foundations of complex human diseases. The Institute cooperates closely with experimental and biomathematical research institutes in China, Germany, and other nations. For example, in 2007, a cooperation agreement was signed between the Center for Biotechnology (CeBiTec) at Bielefeld University and the Chinese Max Planck Partner Institute in Shanghai. This promotes cooperation in recruiting and training doctoral students.

Dress is still studying and lecturing on phylogenetic combinatorics at various higher education institutes. The task of phylogenetic combinatorics is to deliver mathematical concepts and procedures that can be used to determine kin relationships in phylogenetic trees and networks.
When working in China, Dress was always interested in more than just science. His catchword for his Chinese students was the Latin phrase sapere aude in Kant's well-known interpretation: Habe Mut, dich deines eigenen Verstandes zu bedienen! [Have the courage to use your own intellect]. In return, his students gave him the highly honoured title of Lao Yeye [grandfather].

Bielefeld University has been maintaining scientific contacts with China for many years. Recently in 2011, the Rektor of Bielefeld University, Professor Dr.-Ing. Gerhard Sagerer, signed a strategic partnership agreement with the East China Normal University in Shanghai. The Faculty of Mathematics is running the German Research Foundation's (DFG) International Research Training Group 'Stochastics and Real World Models' together with the CAS in Peking, and the Faculty of Physics is cooperating – particularly in doctoral training – with the Huazhong Normal University in Wuhan. Back in 1995, Professor Dr. Joachim Frohn, Faculty of Business Administration and Economics had already been assigned the task of setting up the China Europe International Business School in Shanghai by the EU Commission and was its founding president from 1995 to 1997. 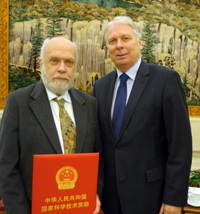